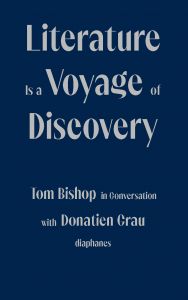 order
wishlist
Tom Bishop traces his career and intellectual path through conversations with Donatien Grau.
In 2012, Tom Bishop invited Donatien Grau to give a talk at NYU. This invitation led to conversations—some of which are assembled in this book—and a frienship. Tom Bishop retraces his own history: his departure from Vienna, his studies, his meetings, his choices, his conception of literature and life, his relationship to the political and economic world; the way he helped define the profession of “curator” as it is practiced today. In these interviews he can be seen as a scholar, an organizer, a major intellectual; as an individual, with his anger, refusals, loyalty, his insatiable appetite for discovery and novelty, and his deep attachment to the university, a place of freedom and creation.
For over sixty years (1929-2022) has contributed to shaping the literary, philosophical, cultural, artistic, but also political conversation between Paris and New York. In his position as professor and director of the Center for French Civilization and Culture at New York University, he made the Washington Square institution one of the great bridges between French innovation and a New York scene that was then in full transformation. Tom Bishop was close to Beckett, championed Robbe-Grillet in the United States, befriended Marguerite Duras and Hélène Cixous, organized historic public encounters—such as the one between James Baldwin and Toni Morrison. He is also a scholar, a recognized specialist in the avant-garde, notably the Nouveau Roman and the Nouveau Théâtre.
A former student from the Ecole Normal Supérieure, Paris, Donatien Grau is a literary graduate from the Political Studies Institute, Paris, and an art critic and writer. He teaches Literature at the Sorbonne University in Paris, writes for several magazines, and is contributing editor of Flash Art magazine. He is interested in the communication of classical culture and the connections between art and literature.
Donatien Grau has edited Olivier Zahm's collection of texts Une avant-garde sans avant-garde – Essai sur l'art (Les presses du réel & JRP|Ringier).
order wishlist
published in June 2021
English edition
11,8 x 19 cm (softcover)
96 pages
15.00 €
ISBN : 978-3-0358-0366-2
EAN : 9783035803662
in stock