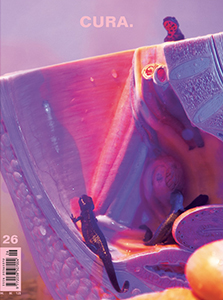 order
Cura's new issue connects the different sections with one common thread: the machine as a possibility or as a threat. The magazine also extends its “Inside the Cover” section with three essays on this issue's cover artist, Max Hooper Schneider. Plus: Sam Lewitt on Michael Asher's 1991 exhibition at Le Consortium in Dijon ; interviews with John Bock, Korakrit Arunanondchai, Kenric McDowell, Bailey Scieszka ; David Horvitz in conversation with Margot Norton ; Nicolas Deshayes' sculptures ; Pakui Hardware ; Haroon Mirza's visual essay ; Bruno Zhu…
The cover features a work by Max Hooper Schneider: within the magazine's new format, his artistic research is presented through a series of texts focused on different aspects of its recent development. Todd von Ammon writes about the artist's Rhizospheres, seen as examples of “hauntological” art; Donatien Grau invites the reader to delve into the “unseparated world” of Hooper Schneider's installation Refuse Refugium; while Cecilia Alemani explores the ecosystem of his recent sculpture Section of Intertidal Landscape (Hair Metastasis).
In the issue a common thread connects the different sections as a sort of fil rouge: the “machine” is interpreted either as a possibility or as a threat, as a mechanism that makes up our present, as a device for reading the past or as a perspective for a future to come. Artists explore this theme in a multitude of ways, combining it with their own vision of human identity, natural environment and social relations.
Anthony Huberman, the Machine Pop Up section's Editor-at-Large, invites the artist and writer Sam Lewitt to reflect on Michael Asher's 1991 exhibition at Le Consortium in Dijon: his diagrams and postcards depicting heating units are read by Lewitt via the notion of “utilities.” Vincent Honoré proposes a new episode of his Icons conversations, talking with John Bock about his performances, installations and films, which explore the dark mechanisms of the human psyche. Ben Vickers interviews Kenric McDowell about the Artists + Machine Intelligence program at Google, supporting an emerging form of collaboration between artists, engineers and intelligent systems. David Horvitz's conversation with Margot Norton highlights the constant dialogue activated in his work between the physical world and the digital image, the biological rhythms of nature and virtual space. Adriana Blidaru talks with Korakrit Arunanonchai about the internal motives for his multifaceted practice, inspired by mythology, religion, history and geology. Gavin Wade chooses to converse directly with Nicolas Deshayes' sculptures: their answers show the inner principles of their formal structures and infrastructures. Pakui Hardware's lab project presents a catalog of materials, fabrics, patterns and schematic layouts of clothing, in which flatness is covered with three-dimensionality, linear graphics with physical textures. Haroon Mirza's visual essay, introduced by Elizabeth Neilson's text, explores the issues of authorship, representation, looking, listening, and understanding in our meta-modern, post-internet epoch. João Mourão & Luís Silva allow us to visit Bruno Zhu's future exhibition at Kunsthalle Lissabon and to imagine its affective cartography. Piper Marshall's 25 questions for Bailey Scieszka provide paths allowing the reader to enter the system of her imagination and creativity.
The HOT! section is as usual the icing on the cake, and this time it is richer than ever. 5 artists are introduced by short critical essays on their work: Greg Parma Smith (presented by Liam Considine); FLUCT (by Whitney Mallett); Timothée Calame (by Arthur Fink); Xinyi Cheng (by Loïc Le Gall); Simeon Barclay (by Frances Loeffler).
Cura.magazine is a platform for contemporary art based in Rome that investigates with an independent spirit today's artistic production, art's emerging scene and the borders that have marked its central moments, through collaborations with international artists and curators, who live in different areas of the world. It has a production of three issues per year.
The platform is also an editorial structure (Cura.books), publishing a series of artist's books (see the corresponding page in the publishers section).
order
published in October 2017
English edition
20,5 x 28,5 cm (softcover)
228 pages (color ill.)
9.00 €
in stock
table of contents