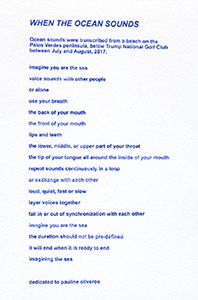 wishlist
A score for 51 human voices intended to mimic the sound of the sea, displayed as loose sheets slipped in PVC sleeve. David Horvitz's hommage to Pauline Oliveros.
David Horvitz made the score When the ocean sounds for human voices intended to mimic the sound of the sea.
The work is linked to an idea of maritime biologist Rachel Carson, who wrote that the percentage of salt in the sea is equal to the salinity of our blood. This idea supports a theory that all life comes from the sea. Imagine the first life forms, with porous skin or cell walls, through which the sea could freely flow into and out of their small bodies. At a certain moment, however, these life forms evolve. They come out of the sea and develop a different type of skin, one that allows them to keep liquids within their bodies. These liquids are ultimately seawater, and so the creatures—as do we—carry the sea with them, no matter where they go.
In a way, transcribing and performing the sounds of the sea are exercises in listening and meditating out loud. At the same time, they are exercises in imagining or remembering that we are actually part of the sea.
Intended to be performed by 51 participants, the score is printed on 60gsm uncoated paper, and slipped in a silkscreened PVC sleeve, with instructions printed on front.
Born 1981, David Horvitz lives and works in Los Angeles.
wishlist
Published with Yvon Lambert.
published in January 2019
English edition
24 x 32 cm (52 loose sheets in PVC sleeve)
104 pages
ISBN : 978-2-36582-026-4
EAN : 9782365820264
sold out 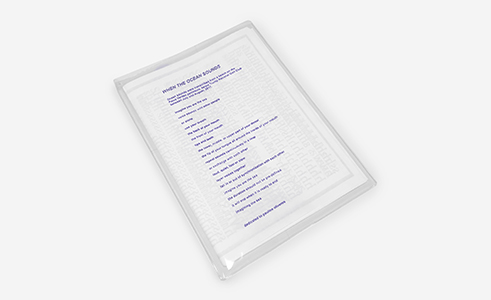 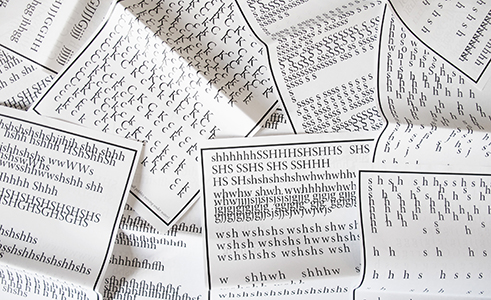