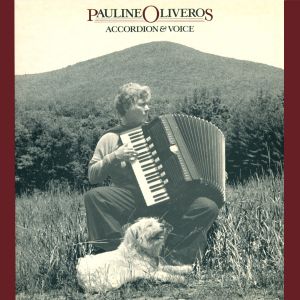 wishlist
Pauline Oliveros' first solo recording, available on LP for the first time since it was originally released in 1982. Cut at Golden and pressed at RTI for maximum fidelity.
"Accordion & Voice was the first of my recordings as a soloist. I was living in an A-frame house in a meadow just below Mount Tremper at Zen Mountain Center. I had a wonderful view of the graceful saddle mountain top. When away on a performance trip I would imagine the mountain as I played Rattlesnake Mountain. I followed the feelings and sensations of my many experiences of the mountain - the changing colors of the season, the breezes and winds blowing through the grasses and trees. Horse Sings From Cloud taught me to listen to the depth of a tone and to have patience. Rather than initiating musical impulses of motion, melody and harmony I wanted to hear the subtlety of a tone taking space and time to develop. The tones linger and resonate in the body, mind, instrument and performance space. My thanks to Important Records for bringing these pieces to be heard again."
Pauline Oliveros
Pauline Oliveros (1932-2016) is a senior figure in contemporary American music. Her career spans fifty years of boundary dissolving music making. In the '50s she was part of a circle of iconoclastic composers, artists, poets gathered together in San Francisco. Recently awarded the John Cage award for 2012 from the Foundation of Contemporary Arts, Oliveros is Distinguished Research Professor of Music at Rensselaer Polytechnic Institute, Troy, NY, and Darius Milhaud Artist-in-Residence at Mills College. Oliveros has been as interested in finding new sounds as in finding new uses for old ones—her primary instrument is the accordion, an unexpected visitor perhaps to musical cutting edge, but one which she approaches in much the same way that a Zen musician might approach the Japanese shakuhachi. Pauline Oliveros' life as a composer, performer and humanitarian is about opening her own and others' sensibilities to the universe and facets of sounds. Since the 1960's she has influenced American music profoundly through her work with improvisation, meditation, electronic music, myth and ritual. Pauline Oliveros is the founder of “Deep Listening,” which comes from her childhood fascination with sounds and from her works in concert music with composition, improvisation and electro-acoustics. Pauline Oliveros described Deep Listening as a way of listening in every possible way to everything possible to hear no matter what you are doing. Such intense listening includes the sounds of daily life, of nature, of one's own thoughts as well as musical sounds. “Deep Listening is my life practice,” she explained, simply. Oliveros is founder of Deep Listening Institute, formerly Pauline Oliveros Foundation.
wishlist
published in July 2022
sold out 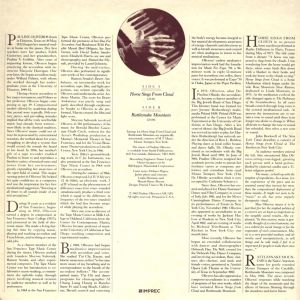