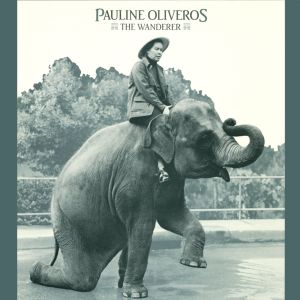 order
wishlist
An utterly essential document of early American minimalism, available on LP for the first time since it was originally released in 1984. Cut at Golden and pressed at RTI for maximum fidelity.
The Wanderer is based on a single modal scale (B C# D D# E F# G#) and rhythmic modes based on a meter consisting of ¾ and ⅜. Part I, Song, is intended to explore the unique resonant qualities of accordion reeds through long sounds. Subtle variations come about from differences in tuning and air pressure. Part II, Dance, demonstrates the sharp accenting power of the accordion bellows in a mixture of cross-rhythms characteristic of jigs, reels, batucadas, Bulgars, klezmer forms, Cajun dances, and music of other diverse cultures.
The Wanderer was composed in November, 1982 especially for the Springfield Accordion Orchestra, directed by Sam Falcetti. This recording documents The Wanderer's world premiere, as it was performed 27 January, 1983 at Marymount Manhattan Theatre. The orchestra consists of twenty accordions, two bass accordions, and five percussionists, with Pauline Oliveros as soloist, Sam Falcetti conducting.
Horse Sings From Cloud, written in 1975, is one of Oliveros' best known works. Like most of her Sonic Meditations, it can be performed vocally and/or instrumentally, solo or in collaboration. A solo version of Horse Sings From Cloud has been recorded on Accordion & Voice. An early version of the score reads, "Sustain a tone or sound until any desire to change it disappears. When there is no longer any desire to change the tone or sound, then change it." This time, Horse Sings From Cloud is performed in ensemble. Joining Pauline Oliveros on bandoneon are Heloise Gold on Harmonium, Julia Haines on accordion, and Linda Montano on concertina. This quartet version incorporates the microtonal differences in tuning of the selected instruments, creating shimmering reed sounds somewhat similar to the shimmering of a Balinese gamelan.
Pauline Oliveros (1932-2016) is a senior figure in contemporary American music. Her career spans fifty years of boundary dissolving music making. In the '50s she was part of a circle of iconoclastic composers, artists, poets gathered together in San Francisco. Recently awarded the John Cage award for 2012 from the Foundation of Contemporary Arts, Oliveros is Distinguished Research Professor of Music at Rensselaer Polytechnic Institute, Troy, NY, and Darius Milhaud Artist-in-Residence at Mills College. Oliveros has been as interested in finding new sounds as in finding new uses for old ones—her primary instrument is the accordion, an unexpected visitor perhaps to musical cutting edge, but one which she approaches in much the same way that a Zen musician might approach the Japanese shakuhachi. Pauline Oliveros' life as a composer, performer and humanitarian is about opening her own and others' sensibilities to the universe and facets of sounds. Since the 1960's she has influenced American music profoundly through her work with improvisation, meditation, electronic music, myth and ritual. Pauline Oliveros is the founder of “Deep Listening,” which comes from her childhood fascination with sounds and from her works in concert music with composition, improvisation and electro-acoustics. Pauline Oliveros described Deep Listening as a way of listening in every possible way to everything possible to hear no matter what you are doing. Such intense listening includes the sounds of daily life, of nature, of one's own thoughts as well as musical sounds. “Deep Listening is my life practice,” she explained, simply. Oliveros is founder of Deep Listening Institute, formerly Pauline Oliveros Foundation.
order wishlist
published in July 2022
33.00 €
in stock 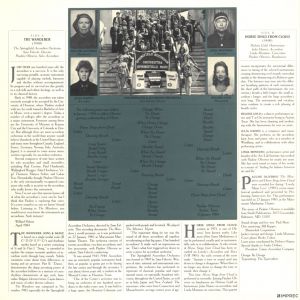