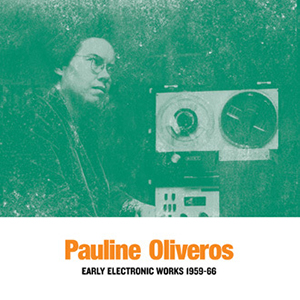 wishlist
Pauline Oliveros's early and rare electronic works in a strictly limited edition on silver vinyl—with no reprint.
Pauline Oliveros is more than ever an important American composer. Born in Houston, Texas on May 30, 1932, the music she produces today is close to the breath of life, with, notably, her pieces for accordion played by herself, the creation of the Deep Listening Center, her approach to improvisation, and her numerous and varied collaborations with, among others, John Cage, Morton Subotnick, Terry Riley, Sonic Youth, Erold, and Andrew Deutsch… What we wish to show here, is her early and definitive contribution to the tape and electronic music of the late fifties and sixties—her systematic exploration of electronic sounds, which was fundamental to this period.

“My work with electronic music began in 1959. My first tape piece was an ambitious four channel work called Time Perspectives. The piece was made by recording small sounds from objects resonated on a wooden wall and changing the tape speed. I used cardboard tubes as filters by inserting the mic into the tube and recording sources through the tubes. I used my bath tub as a reverberation chamber.” (notes on composition by Pauline Oliveros)
Limited edition of 400 copies.
Pauline Oliveros (1932-2016) is a senior figure in contemporary American music. Her career spans fifty years of boundary dissolving music making. In the '50s she was part of a circle of iconoclastic composers, artists, poets gathered together in San Francisco. Recently awarded the John Cage award for 2012 from the Foundation of Contemporary Arts, Oliveros is Distinguished Research Professor of Music at Rensselaer Polytechnic Institute, Troy, NY, and Darius Milhaud Artist-in-Residence at Mills College. Oliveros has been as interested in finding new sounds as in finding new uses for old ones—her primary instrument is the accordion, an unexpected visitor perhaps to musical cutting edge, but one which she approaches in much the same way that a Zen musician might approach the Japanese shakuhachi. Pauline Oliveros' life as a composer, performer and humanitarian is about opening her own and others' sensibilities to the universe and facets of sounds. Since the 1960's she has influenced American music profoundly through her work with improvisation, meditation, electronic music, myth and ritual. Pauline Oliveros is the founder of “Deep Listening,” which comes from her childhood fascination with sounds and from her works in concert music with composition, improvisation and electro-acoustics. Pauline Oliveros described Deep Listening as a way of listening in every possible way to everything possible to hear no matter what you are doing. Such intense listening includes the sounds of daily life, of nature, of one's own thoughts as well as musical sounds. “Deep Listening is my life practice,” she explained, simply. Oliveros is founder of Deep Listening Institute, formerly Pauline Oliveros Foundation.
wishlist
published in September 2018
2 silver vinyl LP
4 tracks (17'20 / 14'34 / 19'19 / 19'19)
sold out