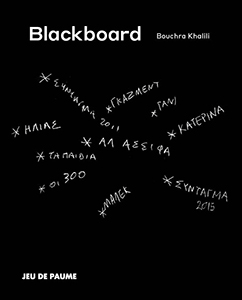 order
wishlist
Bouchra Khalili's films, video installations, photographs and silkscreen prints suggest civic platforms, from which members of minorities perform their strategies of resistance to arbitrary power. This catalogue dedicated to the French-Moroccan artist spans ten years of creation.
This catalogue is published in conjunction with Bouchra Khalili's exhibition at the Jeu de Paume, “Blackboard”, which brings together a wide selection of works produced since 2008. Combining subjectivity, collective history and the transmission of forgotten utopias, the project proposes a meditation on the emancipatory power of words, when they are underpinned by members of minorities often confined to the sidelines of visibility. Blackboard is thus conceived as a space where the protagonists in the artist's works and spectators can meet, rekindling Pier Paolo Pasolini's proposed conception of the work of art as civic poetry.
The first monograph of this scope devoted to Bouchra Khalili, Blackboard is also the catalogue accompanying her solo exhibition of the same title at the Jeu de Paume (5 June–23 September 2018). This project borrows its title from a discussion that Jean-Luc Godard and Jean-Pierre Gorin, both members of the Dziga Vertov group at the time, had with students at Yale University in April 1970. Invited to define the group's activities, Godard pointed at the blackboard in the lecture hall where the meeting was being held and stated: “Making a film like this blackboard and nothing else than that [sic]. The place of the film is right there. But it is your job to see this blackboard and to work on it.” On several occasions, the film-maker made a point of clarifying what this “blackboard” should be: a work produced for the ones who are deprived of the right to self-representation, who can then see their own images and share them.
The flat surface that can implicitly become the space of those excluded from the system of visibility forms the starting point for Bouchra Khalili's work, which brings together a pedagogy of the image and the “cinema of poetry” as theorized by Pier Paolo Pasolini, a major source of inspiration for the artist. The speech act – and its corollary – the gesture of transmission – form the core of most of her works. The question “Who's talking and from where?” runs through the multiple narratives of resistance to colonial power and its continuums, of the struggle for survival, and of renegotiating the terms of autonomous political subjectivities.
What emerges is a collective shaped by a vast geography, in which each person participating in the artist's projects appropriates the speech act as civic poetry as proposed by Pier Paolo Pasolini. They include the narratives of those forced to illegally cross borders (The Mapping Journey Project, 2008–2011), the act of speaking as a form of empowerment and the rise of new political subjectivities (The Speeches Series, 2012–2013), the transmission of the history of internationalist utopias (Foreign Office, 2015) and the shift from the theatrical to the citizen's stage (The Tempest Society, 2017).
Based on the writings of the poet Jean Genet and his radical support of revolutionary movements, Twenty-Two Hours (2018), Khalili's most recent work, reframes the poet's legacy from a contemporary perspective, suggesting that it is poetry itself that produces the revolutionary act.
Combining subjectivity, collective history and the transmission of forgotten utopias, the exhibition and its catalogue propose a meditation on the emancipatory power of words. Blackboard is thus conceived as a space where the protagonists in the artist's works and spectators can meet, rekindling the gesture of the Pasolinian civic poet.
Published on the occasion of the eponymous exhibition at Jeu de Paume, Paris, from June 5 to September 23, 2018.
French-Moroccan artist Bouchra Khalili (born 1975 in Casablanca, lives and works in Paris) has devoted herself to video work, both in single channel and installation form, since 2002. The artist uses this medium for its impurity, which allows her to place her work at the very limits of cinema and the fine arts, documentary and experimental work, blurring the lines between these two practices. Her videos explore the Mediterranean area seen as a territory dedicated to a wandering, nomadic existence. She documents the places she passes through, their images and the images they generate. Khalili produces representations of these spaces' mental dimension by placing them in an unusual perceptive experience, thus testifying to the contemporary reality of emigration and its stories.
Bouchra Khalili is internationally recognized, and her work has been shown in many major exhibitions, including biennials in Sharjah (2011), Sydney (2012), Moscow and Venice (2013), the Paris Triennale (2012) and the latest documenta in Kassel (2017). She has also had solo shows notably at the MoMA in New York, the Palais de Tokyo in Paris, at Harvard University in Cambridge (Mass.), at the MACBA in Barcelona, and at the Secession in Vienna. In 2018 and 2019 several international museums will be holding solo exhibitions of her work.
order wishlist
Foreword by Marta Gili.
Texts by Bouchra Khalili, Élisabeth Lebovici, Nacira Guénif-Souilamas, interview with Bouchra Khalili by Omar Berrada. 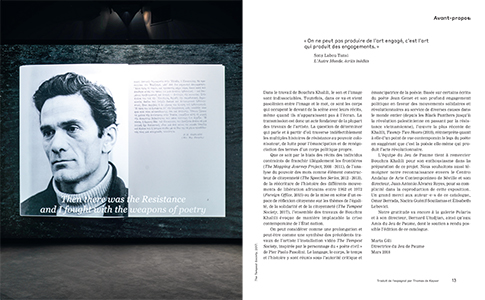 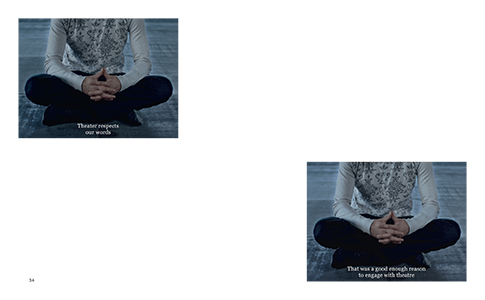 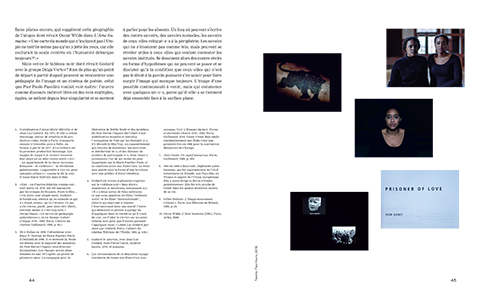 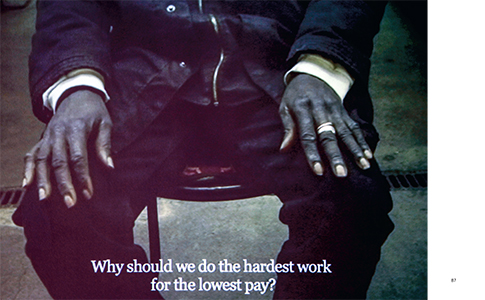 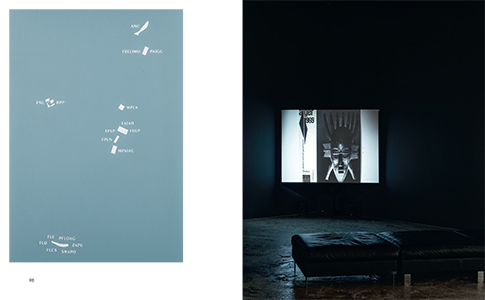 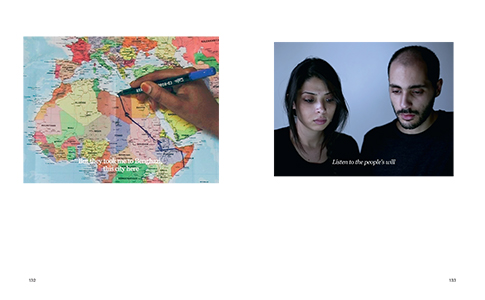 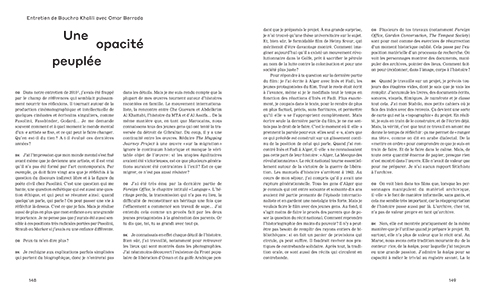 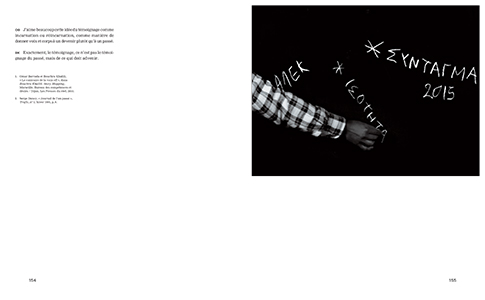 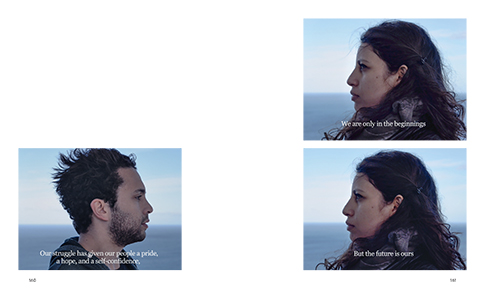