Alvin Lucier (1931-2021) was an American composer, considered a pioneer in contemporary music composition and performance, particularly of live electronic music (with the Sonic Arts Union) and in the field of electroacoustics. His work stands out for a compositional approach focused on acoustic phenomena. For example, Music for Solo Performer (1965) amplifies a performer's brain waves to activate percussion instruments; I Am Sitting in a Room (1970) revealed the frequencies at which a performance space resonates. As of the 1980s, his work re-established a link with instrumental composition and focused mainly on interference beats produced by two sounds with frequencies that are close to each other.
Alvin Lucier has collaborated with many musicians, dancers and interdisciplinary artists, including John Cage, Pauline Oliveros, Stephen O'Malley, Judith Hamann, Reinier Van Houdt, Peter Behrendsen, Mary Lucier and Merce Cunningham. His works are regularly performed by contemporary music ensembles around the world. Alvin Lucier is a major influence on a whole generation of avant-garde, rock and electronic musicians and composers (Oren Ambarchi, Jim O'Rourke, Sonic Youth, Pan Sonic, Alexandre Saint-Onge, Éric Létourneau, Nurse With Wound, etc.). 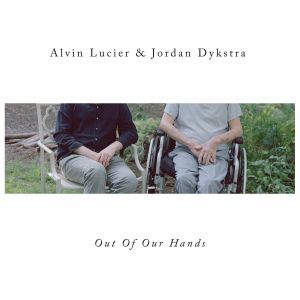 Alvin Lucier, Jordan Dykstra
Out Of Our Hands (vinyl LP)
2022
Important Records
31.00 26.50 €
"Out of Our Hands" brings together Alvin Lucier and Jordan Dykstra who, through the hands of Ordinary Affects, have created debut recordings of two new compositions.