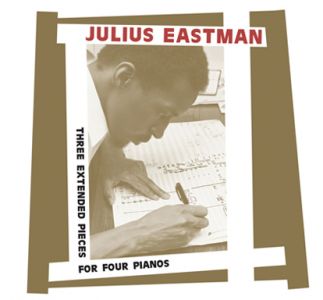 order
wishlist
Julius Eastman's Four Pianos (1979-80), performed by Melaine Dalibert, Stephane Ginsburgh, Nicols Horvath and Wilhem Latchoumia.
It is recognized today that these tutelary pieces for four pianos are among the most powerful in contemporary music, their impact is almost unparalleled. After the historical version recorded forty years ago, this one, featuring four of the greatest European performers, is now regaining its full power. High level recordings too.
Pianist and electroacoustic composer Nicols Horvath is known for his boundariesless musical explorations—he has collaborated with leading contemporary composers from around the world, including Alvin Lucier, Alvin Curran and Valentyn Silvestrov—the recordings of his complete works for piano by Phil Glass made a lasting impression. He has collaborated with Lustmord on the Deconstruction of November by Dennis Johnson.

Melaine Dalibert, a French composer and pianist, fascinated by natural phenomena which are both expected and unpredictable, has developed his own algorithmic procedures of composition which contain the notion of stretched time evoking Morton Feldman, minimal and introspective, adopting a unique concept of fractal series.

Stephane Ginsburgh, a tireless surveyor of the repertoire but also explorer of new music, collaborated with composers such as Philippe Boesmans, Jean-Luc Fafchamps, Stefan Prins, Frederic Rzewski and Matthew Shlomowitz of whom he premiered works, as well as with choreographers such as Anne Teresa De Keersmaeker (Rosas) and recorded Feldman, Duchamp and Satie for Sub Rosa and the complete set of Prokofiev piano sonatas for Cypres.

Wilhem Latchoumia embraces both new music and the classical repertoire with success and charisma. His two recordings for La Dolce Volta (Prokofiev and de Falla) have been highly acclaimed by critics. Winner of the Hewlett-Packard Foundation and the Montsalvatge International Piano Competition, he brilliantly won the First Prize in the 2006 Orléans International Piano Competition.
Julius Eastman (1940-1990) was an American composer, pianist, vocalist, and dancer whose work fell under minimalism. He was among the first composers to combine minimalist processes with elements of pop music.
There was some for John Cage, then came Christian Wolff, and finally Morton Feldman, from this school in New York. Only Julius Eastman remained outside the game, the last figure, the most solitary and enigmatic—undoubtedly also one of the most powerful. In the 1970s and 1980s, Eastman was one of the very few African-Americans to gain recognition in the New York avant-garde music scene. He was politically committed, a figure of queer culture and a solar and solitary poet whose melancholy influenced his genius as well as his tragic destiny: suffering from various addictions, declared missing, actually homeless. During Winter of 1981-82, he got deported from his apartment by the police, who destroyed most of what he owned—including scores and recordings. He was found dead in 1990, on the streets of Buffalo, after years of vagrancy.
order wishlist
published in June 2021
12 pages booklet
17.50 €
EAN : 5411867115038
in stock