Alvin Curran (born 1938 in Providence, Rhode Island) is an American composer, performer, improviser, sound artist, writer, and teacher, based in Rome since 1965. A former student of Elliott Carter, he is the co-founder, with Frederic Rzewski and Richard Teitelbaum, of Musica Elettronica Viva, a group with variable geometry dedicated to electronic and acoustic improvisation, which built one of the first bridges between the experimental avant-gardes on both sides of the Atlantic. Using mainly electronics and environmental found sounds, but also piano, Curran has established himself as one of the most original voices of the American avant-garde. 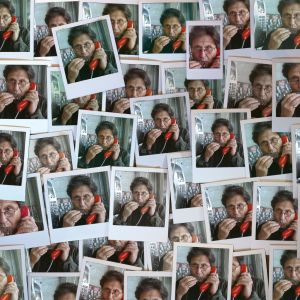 Drumming Up Trouble (vinyl LP)
2022
Black Truffle
Collecting previously unissued works recorded between 2018-2021 and a side-long epic dating back to the early 80s, as the title suggests, "Drumming Up Trouble" focuses on a hitherto almost unknown aspect of Alvin Curran:'s encyclopaedic and omnivorous musical world: his experiments with sampled and synthesised percussion.