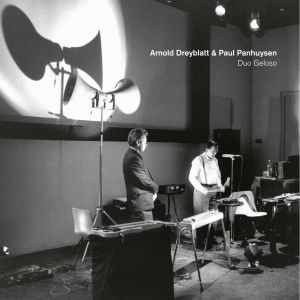 order
wishlist
The first release to document the variety and playfulness of the concerts that Arnold Dreyblatt and Paul Panhuysen's Duo Geloso performed throughout Europe in 1987-88.
Both working across sonic and visual forms, fascinated by numerical relationship and the infinite complexity of string harmonics, Dreyblatt and Panhuysen had a natural affinity for each other's work, strengthened through Dreyblatt's many visits to Het Apollohuis, the important experimental art space Panhuysen helped to found in Eindhoven. However, as René van Peer suggests in the liner notes enclosed within this release, Dreyblatt and Panhuysen took very different approaches to these shared interests; the wonderful energy of these Duo Geloso performances results from the meeting of Dreyblatt's more austere, compositional process with Panhuysen's spontaneity.
Recorded at a concert at Het Apollohuis in December 1987 (a series of beautiful photographs of which adorn the LP's packaging), each of the six pieces presented here is distinctive in terms of instrumentation and performance approach. Using electric guitar and bass tuned by Dreyblatt and played using E-Bow and Panhuysen's motorised plectrums, the opening "Razorburg " moves slowly through a long series of held notes with a madly insistent tremolo that crosses Dick Dale with a mechanised take on the layered guitars of Günter Schickert. The same pair of instruments returns on "Duo for Guitars", where the mechanised attacks dissolve into a harmonic wash, reminiscent of the machine guitar work of fellow Het Apollohuis alumni Remko Scha. On "Love Call", the guitars and bass are accompanied by Panhuysen's distant warbled vocals, familiar to Maciunas Ensemble listeners. On the remarkable "Synsonic Batterie", Panhuysen begins proceedings with a solo barrage of electronic percussion on the Synsonics Drum Machine (a simple drum synthesiser produced by the toy manufacturer Mattell), joined eventually by Dreyblatt performing his signature percussive natural harmonics on pedal steel guitar. When Panhuysen adds his bird whistle to the mix, the performance becomes the perfect exemplar of the Duo Geloso's unique mix of studious close listening and subtle absurdity.
Arnold Dreyblatt (born 1953 in New York) is an American media artist and composer based in Berlin since 1984. An instrumental inventor, associated with New York minimalism, and a collaborator of many artists associated with the Fluxus movement, Dreyblatt is considered one of the precursors of drone music.
Arnold Dreyblatt has studied with composers Pauline Oliveros, La Monte Young and Alvin Lucier and video art pioneers Woody and Steina Vasulka. Whether performing solo with his modified double bass, or surrounded by his iconic Orchestra of Excited Strings ensemble, Dreyblatt develops hypnotic, pulsating music through his own microtonal tuning system. Arnold Dreyblatt's work has been performed by Bang On A Can, Jim O'Rourke, Stockholm's Great Learning Orchestra, the Pellegrini String Quartet, and the Crash Ensemble of Dublin. He has recorded for labels such as Tzadik, Hat Hut, Table of the Elements, Cantaloupe, Important, Choose and Black Truffle.
Artist, musician, performer, organizer, Paul Panhuysen (1934, Borgharen – 2015), after having studied painting and monumental design at the Jan van Eyck Academy in Maastricht, and art sociology at the University of Utrecht, was, successively, the director of the Fine Arts Academy in Leeuwarden, and a curator and head of education and public relations for the Den Haag City Museum and for the Van Abbe Museum in Eindhoven. In addition, he continued to paint and make collages.
In 1965 he founded the artist group “De Bende van de Blauwe Hand.” This group, which was closely related to Fluxus, presented exhibitions, environments and happenings in museums and galleries. Starting in 1965, he presented “situations” meant to involve the audience, and in 1968, he started the Maciunas Quartet, who are still making experimental music as the Maciunas Ensemble. In the early seventies, Panhuysen worked as an advisory artist with urban development teams (o.a. in Zoetermeer, Lunetten, Maaspoort) and developed systematic ordering systems and mathematical series that he has continued to use in his work as an artist. In addition, Panhuysen's work shows a predilection for found objects and the element of chance. To an increasing degree, Panhuysen has been concentrating on sound art, which has come to occupy an important place in his visual art work. He has presented his Long String Installations, which are played in concerts personally and in exhibitions as automats,worldwide in festivals since 1982 . These installations are set-up in indoor or outdoor spaces for anywhere from 1 to 40 days, using specific properties and architectural prospects of the location.
Since 1989 Panhuysen developped artworks in which he confronts the audience with the creativity, intelligence and communicational skills of animals, especially of birds.
In 1980, Panhuysen founded Het Apollohuis, and since then till 1997, he has been the director of this internationally oriented podium where artists from divergent disciplines did present their work. In 1996 he received the Cultural Award of Noord-Brabant and in1998 he became Companion of the Order of the Dutch Lion. In 2004 Panhuysen received in the category Digital Musics from PrixArs Electronica an Honory Mention for the composition A Magic Square of 5 to Look at / A Magic Square of 5 to Listen to.