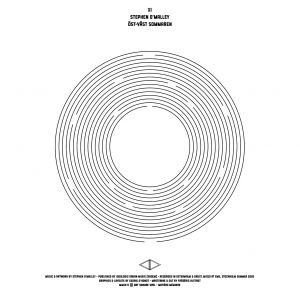 order
wishlist
A vast expanse of intricate ambience, texture, and tone that encounters Stephen O'Malley exploring quiet, introspective depths.
This record is part of the MMXX Series. In anticipation of the year 2020, Matière Mémoire asked 20 experimental/electronic artists to create an original 20 minutes piece and an artwork. Each record is limited to 500 copies and comes as a crystal clear vinyl featuring an original track of 20 minutes on one side, and a laser engraved artwork on the other. Each 12" is housed in a transparent sleeve printed with the MMXX logo, coming with a print of the artist artwork.