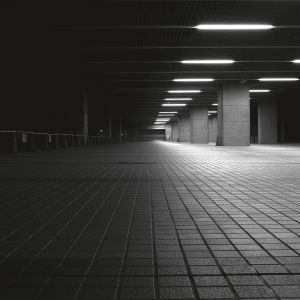 order
wishlist
10th anniversary reissue of this rhythmically churning one-man-band monster of an album, a hypnotic post-/krautrock pulsation recorded in a single inspired studio session, originally released in 2012 on Editions Mego (Oren Ambarchi, on guitar, Moog bass, drums and percussion, is accompanied by a string section consisting of Elizabeth Welsh, James Rushford and Judith Hamann).
For anyone who still associates Oren Ambarchi exclusively with the clipped, bass-heavy tones of solo electric guitar works such as Suspension, this rhythmically churning one-man-band monster of an album-length piece might seem to come out of nowhere. However, listeners who have followed the breadth of his work for the last years (solo and in projects with collaborators from Jim O'Rourke to Stephen O'Malley and Keith Rowe to Keiji Haino) will have noted how Ambarchi has allowed increasingly clear traces of his enthusiasms as a music listener (for classic rock, minimal techno and 70's fusion, among other areas) to surface in his performances and recordings, all the time filtering them through his signature long-form structures and psychoacoustic sonics.
Recorded in a single inspired studio session, Sagittarian Domain displaces Ambarchi's trademark guitar sound from the centre of the mix, its presence felt only as an occasional ghostly reverberated shimmer. Endlessly pulsating guitar and bass lines sit alongside electronic percussion and thundering motorik drumming (familiar from his work with Keiji Haino) at the core of the piece, locking into a voodoo groove like Faust covering a 70's cop show theme. The work is founded on hypnotic almost-repetition, the accents of the drum hits and interlocking bass and guitar lines shifting almost imperceptibly back and forwards over the beat as they undergo gradual transformations of timbre. Cut-up and phase-shifted strings enter around the half-way mark like an abstracted memory of the eastern-tinged fusion of the Mahavishnu Orchestra's classic Visions of the Emerald Beyond, before returning for an extended, stark yet affecting come-down coda, equal parts Gavin Bryars and Purple Rain.
While Sagittarian Domain contains traces of a diversity of influences, it mines all of them to uncover something that is clearly an extension of Ambarchi's own investigations up to this point, exhibiting the same care for micro-detail and surrender to the physicality of sound that are present in all of his work, extending them in new ways to repetition, pulse and rhythm.
Oren Ambarchi (born 1969 in Australia) is a composer and multi-instrumentalist with longstanding interests in transcending conventional instrumental approaches. His work focuses mainly on the exploration of the guitar, "re-routing the instrument into a zone of alien abstraction where it's no longer easily identifiable as itself. Instead, it's a laboratory for extended sonic investigation". (The Wire, UK).
Oren Ambarchi's works are hesitant and tense extended songforms located in the cracks between several schools: modern electronics and processing; laminal improvisation and minimalism; hushed, pensive songwriting; the deceptive simplicity and temporal suspensions of composers such as Morton Feldman and Alvin Lucier; and the physicality of rock music, slowed down and stripped back to its bare bones, abstracted and replaced with pure signal.
From the late 90's his experiments in guitar abstraction and extended technique have led to a more personal and unique sound-world incorporating a broader palette of instruments and sensibilities. On releases such as Grapes From The Estate and In The Pendulum's Embrace Ambarchi has employed glass harmonica, strings, bells, piano, drums and percussion, creating fragile textures as light as air which tenuously coexist with the deep, wall-shaking bass tones derived from his guitar.
Ambarchi works with simple constructs and parameters; exploring one idea over an extended duration and patiently teasing every nuance and implication from each texture; the phenomena of sum and difference tones; carefully tended arrangements that unravel gently; unprepossessing melodies that slowly work their way through various permutations; resulting in an otherworldly, cumulative impact of patiently unfolding compositions.
Ambarchi has performed and recorded with a diverse array of artists such as Fennesz, Otomo Yoshihide, Pimmon, Keiji Haino, John Zorn, Rizili, Voice Crack, Jim O'Rourke, Keith Rowe, Phill Niblock, Dave Grohl, Gunter Muller, Evan Parker, z'ev, Toshimaru Nakamura, Peter Rehberg, Merzbow, Kassel Jaeger, Anthony Pateras, Crys Cole, Giuseppe Ielasi, Judith Hamann, Sunn 0))), James Rushford, Stephen O'Malley and many more.
For 10 years together with Robbie Avenaim, Ambarchi was the co-organiser of the What Is Music? festival, Australia's premier annual showcase of local and international experimental music. Ambarchi now curates the Maximum Arousal series at The Toff In Town in Melbourne and has recently co-produced an Australian television series on experimental music called Subsonics. Ambarchi co-curated the sound program for the 2008 Yokohama Triennale.
Ambarchi has released numerous recordings for international labels such as Touch, Southern Lord, Table Of The Elements and Tzadik.
order wishlist
Published by Black Truffle.
published in March 2022
27.00 €
EAN : 4250101433177
in stock