Composer, producer, saxophonist, and multi-instrumentist John Zorn (born 1953 in New York) and has been in touch with the creative environment of downtown New York most of his life. Drawing on his experience in a variety of genres including jazz, rock, hardcore punk, classical, klezmer, film, cartoon, popular and improvised music, John Zorn has created an influential body of work that defies academic categories. 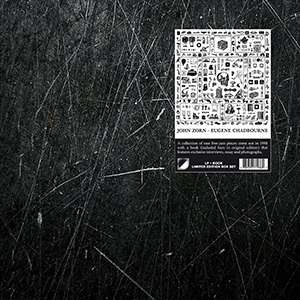 John Zorn, Eugene Chadbourne
1977-1981 (vinyl LP + book box set)
2017
Song Cycle Records
sold out
A collection of rare free-jazz pieces performed by John Zorn and selected by the American guitarist and music critic Eugene Chadbourne. Originally released in 1998 to accompany the book release Sonora: John Zorn, the album is presented here for the first time in an exclusive release in limited edition on vinyl. This special issue includes the original book that features exclusive interviews, essays and photos about the artist's entire oeuvre up to 1988.