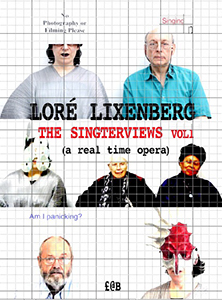 order
wishlist
The first volume of the sung interviews by mezzo-soprano Loré Lixenberg (with Phill Niblock, Pauline Oliveros, Trevor Wishart…).
The Singterviews are a series of sonic encounters that make up different scenes of one, ongoing real time opera, conceived in 2012.
Volume 1 DVD of The Singterviews is with composers, forming an opera film using extended voice and operatic voice to communicate with the guest. The composers—who previously composed for Loré Lixenberg—are invited to speak or sing back as they like.
In a live performance of The Singterviews, a character called PANIC selects a stranger through observing the audience via CCTV cameras, to be in her panic room that is a space capsule, in which all the music of the world is preserved, the idea being that PANIC and her chosen one are the last beings alive at the end of the world.
British mezzo-soprano Loré Lixenberg is a prolific figure in contemporary music. She has performed widely in opera, concert repertoire and music-theatre, and works with many leading composers. She has performed internationally at many festivals and venues including those of Salzburg, Lucerne, Donaueschingen, Aldeburgh, Witten, Manchester International Festival, Aspern festival, Edinburgh and Huddersfield, La Fenice and at the Wien Modern and Oslo Ultima festivals.She also performed in the Berlin Philharmonie as well as the opening season of the Hamburg Elbphilharmonie .She has performed and recorded with orchestras and ensembles including the Halle, Tokyo PO, Danish National SO, Swedish Radio Orchestra, Ensemble Intercontemporain, London Sinfonietta, Klangforum Wien, BCMG,BBCSO,Hannover Opera, Ensemble Aventure, Icelandic SO and Danish Royal Opera,SWDR,Nash Ensemble.
order wishlist
Mastering: Frédéric Acquaviva.
published in November 2018
15.00 €
in stock
table of contents