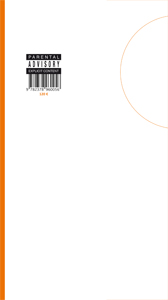 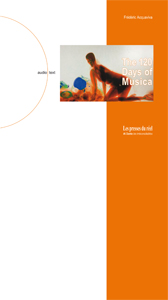 order
120 true and oxymoronesque scores-instructions composed by Frédéric Acquaviva between 2015 and 2017 in Berlin. Luxury limited edition, signed, including an original artwork and Edition de tête, signée, des 120 partitions-instructions réelles et oxymoresques composées par Frédéric Acquaviva entre 2015 et 2017 à Berlin, accompagné d'un CD-R de 60 minutes contenant le live radio de la pièce sonore « Oxymoron Music », ainsi que d'une œuvre originale. the sound artwork “Oxymoron Music” on a 60 minutes CD-R (as well as an annotated vomit bag for possible use in performance or personal reading).
Traitor to his country, Frédéric Acquaviva composes against adversity and for more than a quarter of a century, a bordeline and transgender musical work, with the modus operandi “Never repeat yourself”. “The 120 Days of Musica” aren't Fluxus gags, nor imaginary lettrist works, nor situationist ambiant derives, nor actionist actions, nor contemporary music from ancient times, but 120 true and oxymoronesque scores composed between 2015 and 2017 in Berlin.
Sodomisation of the “musical domain” or terrorist attack against a sclerotic music world and a decomposed society, would “The 120 Days of Musica” be that new, magnanimous and long waited for “Art of the Fugue”?

“This cycle is destined to be performed entirely or by fragments, during 120 days or on a single evening.
Those pieces are true scores that need to be performed, so one can understand the quantity of “music” each piece is embedded with.
Merci de votre incompréhension.”
Also available in regular edition.
Frédéric Acquaviva, born in 1967, has been since 1990 a sound artist and experimental music composer, creating chronopolyphonic installations and CDs and playing in art galleries, in museums or in underground venues.
Staying away from traditional networks of musicians and composers, he meets and works with historical figures in art, poetry or video, sometimes a long time before their being discovered by the media. He has collaborated this way with Isidore Isou, Maurice Lemaître, Marcel Hanoun, Pierre Guyotat, Jean-Luc Parant, mezzo-soprano Loré Lixenberg, film maker F.J. Ossang and choreographer Maria Faustino, among others.
His astonishing music, in which he chooses an experimental presentation using, is constantly exploring, always in new ways, the relationship between voice and language, sound and its meaning, even the idea of physical body sounds integrated into the musical composition, kept away from the concert hall's diffusions (acousmatic or sound installations). As the critic Eric Vautrin remarked in Mouvement magazine, his work is not a “sound work but a work about sound”.
Acquaviva has become not only one of the essential protagonists of the rediscovery of historical avant-garde, more precisely of Lettrism (Isidore Isou, Gabriel Pomerand, Maurice Lemaître, Gil J Wolman, Jean-Louis Brau, Jacques Spacagna, François Dufrêne, Roland Sabatier, Alain Satié, Broutin), but of Sound Poetry (Henri Chopin, Bernard Heidsieck), and has worked with some unique and outstanding historical figures (Pierre Albert-Birot, Otto Muehl). He has done this through his knowledge of and interest in different disciplines: editing books, curating art exhibitions, being an events creator, lecturing, establishing catalogue raisonnés and bibliographic databases, creating radiophonic works, being an art critic, a filmmaker, and a publisher, with Editions Derrière la Salle de Bains or for his own editions: AcquAvivA, and the magazine CRU.