Gérard-Philippe Broutin (born 1948 in Saint-Cloud, France) studied Art History at the University of Paris and the École du Louvre. Alongside other artists such as Maurice Lemaître, Roland Sabatier, Alain Satié, François Poyet or Jean-Pierre Gillard in particular, Broutin meets Isidore Isou in 1968 and from then on participates in most of the events and literary exhibitions of the lettrist movement.
His first pictorial works were shown in March 1969, during the exhibition “Today Lettrism and Hypergraphy” at Galerie Stadler in Paris. The scattered elements that he proposes—lines of writing, hieroglyphic ideograms, empty compartments, precisely drawn—evolve towards the creation of a personal alphabet, made of notional signs, mainly animals and plants, which will be his particular mark. 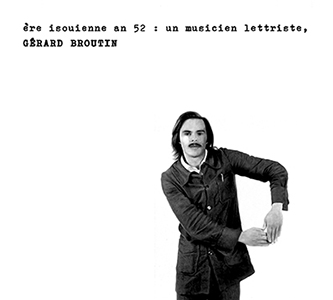 Ère isouienne an 52 – Un musicien lettriste (CD)
2018
Tochnit Aleph
First ever release of the sound poetry pieces by French lettrist artist Gérard-Philippe Broutin. The remarkable lettrist text-sound pieces contained on this CD were written during the early 1970's and recorded and broadcast at Radio France in September 1976. With introductory texts by Jean-Pierre Gillard.