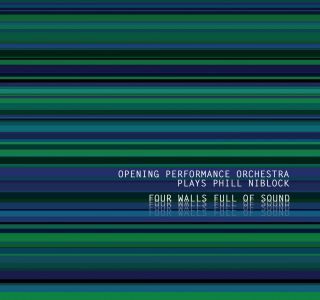 wishlist
An electronic interpretation of the works of Phill Niblock by the Prague-based group Opening Performance Orchestra.
This studio version, recorded at the re-set studio, was preceded by a live performance at the 2017 Ostrava Days Festival of New and Experimental Music. The cover was designed by Jaroslav Buzek and the booklet includes essays by Kurt Gottschalk and Petr Ferenc. Sound designer Stephan Mathieu took part in shaping the resultant sound of the recording.

"You should play the music very loud. If the neighbors don't complain, it's probably not loud enough."
Phill Niblock
Opening Performance Orchestra is a seven-member ensemble encompassing a wide genre span—from the 20th-century electronic thrusts of the musical avant-garde as far as contemporary Japanese noise music. Its own creations are based on fraction music, with the initial sound being digitally destroyed, fractured, and uncompromisingly rid of all its original attributes within the spirit of the credo “no melodies – no rhythms – no harmonies”. The results are original compositions (such as Spring Ceremony or Fraction Music, Evenfall, Creeping Waves) as well as reinterpretations of other composers' pieces that the ensemble feels to be in the same vein—cases in point being Inspirium Primum, referring to the material by Hiroshi Hasegawa, a Japanese noise music representative; Re:Broken Music, based on the destroyed music of the Czech Fluxus artist Milan Knížák; Chess Show, a distinctive John Cage reminiscence; Perceived Horizons, a tribute to musique concrète; The Noise of Art and Futurist Soirée, originating from the ideas and texts of the Italian Futurists and bringing to bear authentic instruments known as intonarumori.
During its existence, Opening Performance Orchestra has given a number of concerts, for example, at MaerzMusic, a contemporary music festival in Berlin (2014, Broken Re:broken); at the New Music Exposition international festival in Brno (2014, Broken Re:broken); at the Minimarathon of electronic music held as a part of the Days of Ostrava festival of contemporary music (2013, The Noise Of Art); at the Next festival of progressive music in Bratislava (2014, Fraction Music VII); at the Prague Industrial Festival (2006, Fraction Music, and 2008, Astropo); at the Wroclaw Industrial Festival (2007, Fraction Music II); at several previews of the Czech Concretists' Club, including a retrospective at Topièùv salon in Prague (2015, The Contours of Sounds); at the opening of the Membra Disjecta for John Cage exhibition at the DOX gallery in Prague (2012, Chess Show); at the National Gallery in Prague during the Art's Birthday party given by Czech Radio (2016, Futurist Soirée); and at Ostrava Days, in co-operation with Reinhold Friedl (2017, Chess Show).
Since 2010, Opening Performance Orchestra has regularly organised Noise Zone, an open audio-visual project mapping the noise scene, which has hosted, among others, Hiroshi Hasegawa, Astro, Merzbow, Schloss Tegal, Einleitungszeit, Birds Build Nests Underground, Instinct Primal, Magadan, Napalmed and others.
Since 2006, Opening Performance Orchestra has released CDs, mostly as self-publishers, but also with the Belgian label Sub Rosa (Broken Re:broken, together with Milan Knížák, October 2015) and the German label Psych KG (Fraction Elements, together with Hiroshi Hasegawa, August 2016). At the beginning of 2016, Opening Performance Orchestra recorded the composition Futurist Soirée, commissioned by Czech Radio, which was performed within the EBU international exchange network in November 2016.

One of the most important multimedia artists of his generation, American minimalist composer, filmmaker and video artist Phill Niblock (born in 1933 in Anderson, Indiana, lives and works in New York) has produced a multidisciplinary work. His “Intermedia Art” features a combination of minimalist music, conceptual art, structural cinema, systematic or even political art, and has actively contributed to transform our perception and experience of time.
Admittedly one of the greatest experimental composers of our time, Phill Niblock initiated his career as a photographer and film director. A jazz passionate, he moved to New York in 1958 where he started photography In the mid-1960s, specializing in portraits of jazz musicians (Duke Ellington, Charles Mingus, Billy Strayhorn...). In the middle of the 1960s, he made his first films for the dancers and choreographers of the Judson Church Theater. From 1968 on, Phill Niblock focused on music and composed his first pieces, which, according to the artist, should be listened to at loud volume in order to explore their overtones. He pursued his film projects independently with The Movement of People Working, a series of films lasting over 25 hours, made between 1973 and 1991, in which the repetitive nature of work movements acts as a direct echo to his musical compositions.
Since the mid-1960s, his analogue photographic work explores New York's architecture and urban planning. The sequencing and layout of his images offer a mapping of the location and object photographed, such as the areas in South Bronx (1979) fallen into disuse or the facades of SoHo Broadway district (1988). Phill Niblock is particularly interested in the screening of moving images – films and slideshows. Produced between 1966 and 1969, Six Films, a series of short films with sound realized with 16mm film, heralds his experimental method through portraits of artists and musicians such as Sun Ra and Max Neuhaus.
In 1968, the artist started experimenting a combination of his visual productions with his musical scores in order to create sound architectural and environmental compositions. Recreated by the artist for the first time since its last presentation in 1972 for the purpose of this exhibition, the Environments series extracts the reality of different surroundings through images, all the while generating a dense and intense temporary environment of projected images, music and movements throughout the museum space.
Phill Niblock is the director of Experimental Intermedia, a foundation born in the flames of 1968's barricade-hopping.
wishlist
published in June 2021
EAN : 5411867115151
sold out