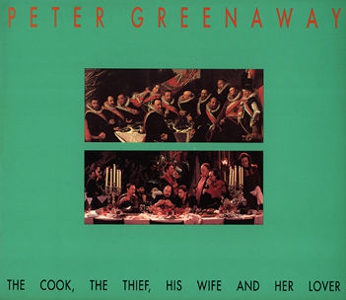 wishlist
The complete script of the film The Cook, the Thief, His Wife and Her Lover, a tragic tell about revenge and an allegory for Thatcherism. Greenaway reveals himself not only as a great creator of cinematographic splendors but also as an authentic writer who seeks literary imagery and metaphor.
The wife of a barbaric crime boss engages in a secretive romance with a gentle bookseller in between meals at her husband's restaurant. This classic tragedy revolves around the eternal love triangle—with the cook as the underdog and the thief as the true figure of evil. The cook, the thief, his wife and her lover finds his originality in his unusual employment of the human body functions: here, the characters eat, drink, defecate, copulate, belch, vomit, undress, bleed... Food, color coding, sex, murder, torture and cannibalism are the exotic fare of this beautifully filmed but brutally uncompromising modern fable.
Peter Greenaway (born, 1942 in Newport, Wales, lives and works in Amsterdam) trained as a painter for four years, and started making his own films in 1966. He has continued to make cinema in a great variety of ways, which has also informed his curatorial work and the making of exhibitions and installations in Europe from the Palazzo Fortuny in Venice and the Joan Miro Gallery in Barcelona to the Boijmans van Beuningen Gallery in Rotterdam and the Louvre in Paris. He has made 12 feature films and some 50 short-films and documentaries, been regularly nominated for the Film Festival Competitions of Cannes, Venice and Berlin, published books, written opera librettos, and collaborated with composers Michael Nyman, Glen Branca, Wim Mertens, Jean-Baptiste Barriere, Philip Glass, Louis Andriessen, Borut Krzisnik and David Lang. His first narrative feature film, The Draughtsman's Contract, completed in 1982, received great critical acclaim and established him internationally as an original film maker, a reputation consolidated by the films, The Cook, the Thief, his Wife & her Lover, The Pillow Book, and The Tulse Luper Suitcases.
wishlist
published in October 1989
English edition
21,5 x 18,5 cm (softcover)
128 pages (110 color & b/w ill.)
ISBN : 978-2-906571-11-2
EAN : 9782906571112
currently out of stock