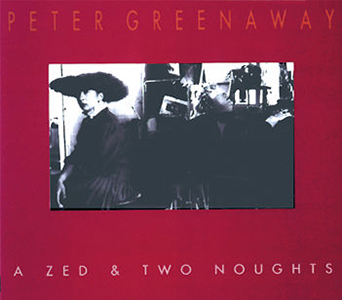 order
wishlist
Divided in eight sequences corresponding to the stages of Darwin's Theory of Evolution, A Zed and Two Noughts (Z.O.O) stars two zoologists and conjoined brothers whose lives are dramatically altered when their wives are killed in a car crash. A tragic story in which Greenaway discusses the irreversibility of death as opposed to the reversibility of forms.
The two protagonists of A Zed and Two Noughts (Z.O.O) are confronted with two deaths whose circumstances undermine their certainties. Unable to let it rest as an Act of God, they demand some sort of satisfaction. One brother, unable to countenance the inevitable decay of his wife's body, tries to photograph death itself as he records the decay of animal corpses. The other brother, carrying out his dead wife's wishes, sets about freeing a succession of animals from the zoo... Here is another fiction which persuades an audience that, in a world of great natural beauty, all human activity is bizarre, tragic and farcical.
Peter Greenaway (born, 1942 in Newport, Wales, lives and works in Amsterdam) trained as a painter for four years, and started making his own films in 1966. He has continued to make cinema in a great variety of ways, which has also informed his curatorial work and the making of exhibitions and installations in Europe from the Palazzo Fortuny in Venice and the Joan Miro Gallery in Barcelona to the Boijmans van Beuningen Gallery in Rotterdam and the Louvre in Paris. He has made 12 feature films and some 50 short-films and documentaries, been regularly nominated for the Film Festival Competitions of Cannes, Venice and Berlin, published books, written opera librettos, and collaborated with composers Michael Nyman, Glen Branca, Wim Mertens, Jean-Baptiste Barriere, Philip Glass, Louis Andriessen, Borut Krzisnik and David Lang. His first narrative feature film, The Draughtsman's Contract, completed in 1982, received great critical acclaim and established him internationally as an original film maker, a reputation consolidated by the films, The Cook, the Thief, his Wife & her Lover, The Pillow Book, and The Tulse Luper Suitcases.
order wishlist
published in March 2000
English edition
21 x 18 cm (softcover)
128 pages (32 color il.)
23.00 €
ISBN : 978-2-906571-69-3
EAN : 9782906571693
in stock