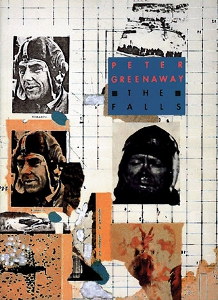 order
wishlist
A commission examines a sample of 92 persons subject to an enigmatic obsession with birdwatching and flying: a fictional investigation playing with the codes of documentary journalism which served as a script for Greenaway's film The Falls.
This unusual and fictional text is as much the work of a filmmaker as that of an artist-writer who, in researching new forms of expression, mixes the realist aesthetics of documentary journalism with a reflection on the administrative and scientific treatment of mass catastrophes. Drawing on an English literary movement of the eighteenth century, the Imaginary Biographies, Peter Greenaway here creates biographies of 92 people whose names were drawn from the authentic Official Directory published every three years by the commission in charge of investigating the unique phenomenon known as the Violent Unknown Event (VUE). This phenomenon remains unexplained to this day and produced 19 million victims throughout the world in one day. Topics covered in The Falls feature the main themes Greenaway will explore in his eponymous experimental film.
Peter Greenaway (born, 1942 in Newport, Wales, lives and works in Amsterdam) trained as a painter for four years, and started making his own films in 1966. He has continued to make cinema in a great variety of ways, which has also informed his curatorial work and the making of exhibitions and installations in Europe from the Palazzo Fortuny in Venice and the Joan Miro Gallery in Barcelona to the Boijmans van Beuningen Gallery in Rotterdam and the Louvre in Paris. He has made 12 feature films and some 50 short-films and documentaries, been regularly nominated for the Film Festival Competitions of Cannes, Venice and Berlin, published books, written opera librettos, and collaborated with composers Michael Nyman, Glen Branca, Wim Mertens, Jean-Baptiste Barriere, Philip Glass, Louis Andriessen, Borut Krzisnik and David Lang. His first narrative feature film, The Draughtsman's Contract, completed in 1982, received great critical acclaim and established him internationally as an original film maker, a reputation consolidated by the films, The Cook, the Thief, his Wife & her Lover, The Pillow Book, and The Tulse Luper Suitcases.
order wishlist
published in October 1993
English edition
15 x 21 cm (softcover)
128 pages
23.00 €
ISBN : 978-2-906571-32-7
EAN : 9782906571327
in stock