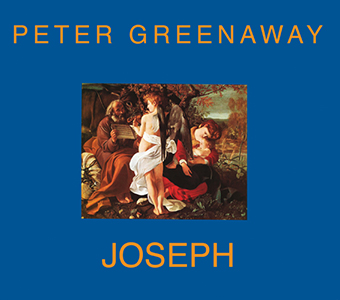 order
wishlist
The script for Joseph, the new film by Peter Greenaway, an ironic portrayal of the figure of Joseph, father of Jesus. Here, God—“the other father”—becomes, in Greenaway's words, “vulnerable to jealousy… since he has a rival on earth.”
The impetus to explain various mysteries and anxieties in the story of Christ's beginning and end—not least the virgin birth and the last words on the cross—came from a question asked by a six-year old girl—my daughter—who wondered how “on earth” could Christ have two fathers? Which is a valid question in the circumstances from such a source. The following script for a film is some sort of answer. Much of it could be seen to be a possible scenario where none of it really contradicts canonical wisdom, only re-arranges it. This version of events could be as true as any other. The Bible is known to be an edited, massaged, censored, and often reconstructed propaganda vehicle made at some distance from the events it relates; it was the record of the product of priests, arranged to fulfil and justify Old Testament prophecy in order to establish a new religion based on a new Messiah. And those priests lived in a Hellenic world where it was not so uncommon for Gods and mortals to copulate. Ambitious Judean priests work out a conspiracy to bed God with a mortal female to produce a son, and educate him to become a leader of men. But if their God is going to play the mortal game, is it not likely that he might fall mortally in love, and thus become vulnerable to jealousy, especially since he has a rival on earth called Joseph?
Peter Greenaway (born, 1942 in Newport, Wales, lives and works in Amsterdam) trained as a painter for four years, and started making his own films in 1966. He has continued to make cinema in a great variety of ways, which has also informed his curatorial work and the making of exhibitions and installations in Europe from the Palazzo Fortuny in Venice and the Joan Miro Gallery in Barcelona to the Boijmans van Beuningen Gallery in Rotterdam and the Louvre in Paris. He has made 12 feature films and some 50 short-films and documentaries, been regularly nominated for the Film Festival Competitions of Cannes, Venice and Berlin, published books, written opera librettos, and collaborated with composers Michael Nyman, Glen Branca, Wim Mertens, Jean-Baptiste Barriere, Philip Glass, Louis Andriessen, Borut Krzisnik and David Lang. His first narrative feature film, The Draughtsman's Contract, completed in 1982, received great critical acclaim and established him internationally as an original film maker, a reputation consolidated by the films, The Cook, the Thief, his Wife & her Lover, The Pillow Book, and The Tulse Luper Suitcases.
order wishlist
published in September 2016
English edition
21,5 x 18,5 cm (softcover)
112 pages
20.00 €
ISBN : 978-2-914563-89-5
EAN : 9782914563895
in stock