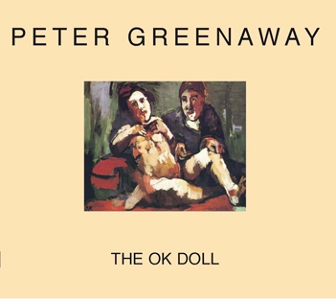 order
wishlist
Austrian painter Oskar Kokoschka's love for Alma Mahler was so great that he had a life-sized model of her made. The OK Doll, by Peter Greenaway, is the script for an unrealized film about the doll that Kokoschka lived with for three years.
The Austrian painter Oskar Kokoschka fell in violent carnal love with Alma Mahler, Gustav Mahler's widow. They had a temptuous affair and Alma aborted Oskar's child and left him. Distraught and disorientated, wishing for oblivion, Oskar signed up as a soldier and was wounded in chest and head in the trenches of the First World War. He could not forget or forgive Alma and he had her dressmaker make him a life-sized model of her, complete with the full anatomy for making love. He lived with this model for three years, taking it to the opera, to church, to the beach, to restaurants and country picnics and obsessively painting it in his studio. The gap between believing and not believing in the doll's existence as a human being was thin and subject to violent mood swings. Oskar,loved and abused the Alma Mahler substitute to distraction. In an attempt to pull him from his destructive obsession, the dressmaker and Oskar's friends, humoured him, making a model of Oskar himself, such that the model of Alma and the model of Oskar contrived to make a child whose still-born birth shocked Oskar back into reality as the streets of Austria were beginning to fill with Nazis.
Peter Greenaway (born, 1942 in Newport, Wales, lives and works in Amsterdam) trained as a painter for four years, and started making his own films in 1966. He has continued to make cinema in a great variety of ways, which has also informed his curatorial work and the making of exhibitions and installations in Europe from the Palazzo Fortuny in Venice and the Joan Miro Gallery in Barcelona to the Boijmans van Beuningen Gallery in Rotterdam and the Louvre in Paris. He has made 12 feature films and some 50 short-films and documentaries, been regularly nominated for the Film Festival Competitions of Cannes, Venice and Berlin, published books, written opera librettos, and collaborated with composers Michael Nyman, Glen Branca, Wim Mertens, Jean-Baptiste Barriere, Philip Glass, Louis Andriessen, Borut Krzisnik and David Lang. His first narrative feature film, The Draughtsman's Contract, completed in 1982, received great critical acclaim and established him internationally as an original film maker, a reputation consolidated by the films, The Cook, the Thief, his Wife & her Lover, The Pillow Book, and The Tulse Luper Suitcases.
order wishlist
published in March 2014
English edition
21 x 18 cm (softcover)
72 pages
20.00 €
ISBN : 978-2-914563-70-3
EAN : 9782914563703
in stock