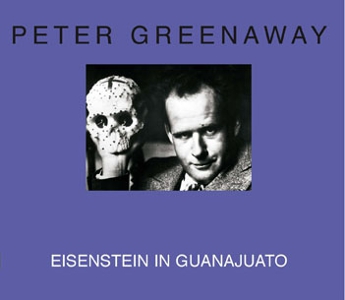 order
wishlist
This script by Peter Greenaway follows Russian director Eisenstein to Guanajuato, Mexico, where he worked for ten days on Que Viva Mexico. Ten days that shook Eisenstein face to face with sex and death which changed the man and the filmmaker.
Eisenstein, the great and innovative Russian film director went to Mexico in 1930 to make a film about pre-Columbian peoples, Que Viva Mexico. Whilst in Mexico this super-intellectual polymath, product of a powerful political turmoil, came face to face with sex and death, life's two non-negotiables, and subject of man's greatest fascinations. Aged 33, he was obsessed by a museum of corpses, and a child, victim of a mud-slide, died in his arms. And he fell in consummated carnal love with a man. Here is an account of ten days that changed Eisenstein.
Peter Greenaway (born, 1942 in Newport, Wales, lives and works in Amsterdam) trained as a painter for four years, and started making his own films in 1966. He has continued to make cinema in a great variety of ways, which has also informed his curatorial work and the making of exhibitions and installations in Europe from the Palazzo Fortuny in Venice and the Joan Miro Gallery in Barcelona to the Boijmans van Beuningen Gallery in Rotterdam and the Louvre in Paris. He has made 12 feature films and some 50 short-films and documentaries, been regularly nominated for the Film Festival Competitions of Cannes, Venice and Berlin, published books, written opera librettos, and collaborated with composers Michael Nyman, Glen Branca, Wim Mertens, Jean-Baptiste Barriere, Philip Glass, Louis Andriessen, Borut Krzisnik and David Lang. His first narrative feature film, The Draughtsman's Contract, completed in 1982, received great critical acclaim and established him internationally as an original film maker, a reputation consolidated by the films, The Cook, the Thief, his Wife & her Lover, The Pillow Book, and The Tulse Luper Suitcases.
order wishlist
published in January 2014
English edition
21 x 18 cm (softcover)
88 pages
20.00 €
ISBN : 978-2-914563-71-0
EAN : 9782914563710
in stock