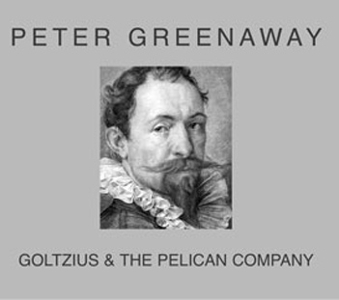 order
wishlist
The screenplay of Goltzius & the Pelican Company‏—the second feature film in the series “Dutch Masters” of Peter Greenaway—about Hendrik Goltzius, a late 16th century Dutch printer and engraver of erotic prints.
In the winter of 1590, Duch printer Goltzius seduces the Margrave of Alsace into paying for a printing press to make and publish illustrated books. Goltzius promises him an extraordinary book of pictures of the Old Testament Biblical stories. Erotic tales of Lot and his daughters, David and Bathsheba, Samson and Delilah and John the Baptist and Salome,stories in which themes of incest, adultery, female entrapment and necrophilia abound. Margrave's court is completely seduced by Goltzius' titillating storytelling, and swiftly sinks into a pit of lechery and religious politics, until the court is forced to buy its way out, and Goltzius can begin his ambitious endeavor.
Peter Greenaway (born, 1942 in Newport, Wales, lives and works in Amsterdam) trained as a painter for four years, and started making his own films in 1966. He has continued to make cinema in a great variety of ways, which has also informed his curatorial work and the making of exhibitions and installations in Europe from the Palazzo Fortuny in Venice and the Joan Miro Gallery in Barcelona to the Boijmans van Beuningen Gallery in Rotterdam and the Louvre in Paris. He has made 12 feature films and some 50 short-films and documentaries, been regularly nominated for the Film Festival Competitions of Cannes, Venice and Berlin, published books, written opera librettos, and collaborated with composers Michael Nyman, Glen Branca, Wim Mertens, Jean-Baptiste Barriere, Philip Glass, Louis Andriessen, Borut Krzisnik and David Lang. His first narrative feature film, The Draughtsman's Contract, completed in 1982, received great critical acclaim and established him internationally as an original film maker, a reputation consolidated by the films, The Cook, the Thief, his Wife & her Lover, The Pillow Book, and The Tulse Luper Suitcases.
order wishlist
published in December 2009
English edition
21 x 18 cm (softcover)
144 pages (18 b/w ill.)
25.00 €
ISBN : 978-2-914563-50-5
EAN : 9782914563505
in stock