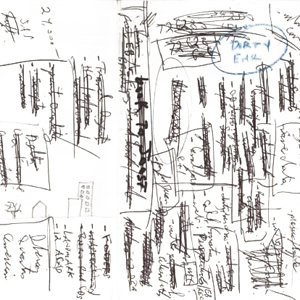 order
Brandon LaBelle's Dirty Ear was recorded and produced over the last year using dirty field recordings, found sounds, sound effects, archives, and sonorous dramas. Composed as a series of micro-narratives each designed to intervene onto imagined settings or spatial locations, as a counter-sonorities.
Initially tracks 1-4 were composed for the installation work Prototypes for the mobilization and broadcast of fugitive sound shown at the Enrico Fornello Gallery, Prato.
Brandon LaBelle is a musician, artist, writer, theorist, curator and editor (founder of Errant Bodies). His work is based on performance, sound installation, recording and use of found sounds. LaBelle reflects fluently on his artistic practice, drawing attention to the social dimensions of listening and manner in which sounds, in multiple variations, play upon public spaces, and drawing connections across media and incorporate video, as well as architectural and sculptural vocabularies into an expanded field that embraces rhetorical and spatial challenges.
order
published in 2008
13 x 13 cm (gatefold sleeve)
54'
14.00 €
in stock
table of contents