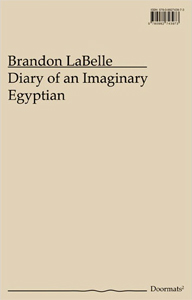 order
wishlist
Brandon LaBelle's revolutionary diary during the Arab Spring.
The ongoing protest movements spanning the globe seek to challenge, revitalize and rethink political processes as well as demand economic justice. Forming into a dispersed and poignant network of struggles, the current situation reveals a global culture of hope, angst and imagination.
Author and artist Brandon LaBelle has sought to engage these events by way of a diary of affiliation and reciprocation in which personal memories and cultural reflections search for remote connection, in particular, with the Arab Spring. His Diary of an Imaginary Egyptian is marked by an urgency to unsettle divides, both imaginary and physical, between west and east, Anglo and Arab, and to put into question narratives of the political. Written between February and June of 2011, the Diary functioned as a daily consideration of the intensity of events erupting around the world structurally linked to personal thoughts and memories. This five-month period acts as a platform from which questions around US imperialism, art and revolution, the task of writing, and the possibility of new political subjectivity are raised. LaBelle asks for an "agency of the intimate", outlining a tender map of the transnational.
Diary of an Imaginary Egyptian is the second issue of the new book series Doormats published by Errant Bodies Press.
Doormats seeks to unfold creative perspectives on what the political can be today: from critical appraisals of economic injustices to experimental research and projects on public life, the series aims for new political subjectivity. Doormats supports experimental writing, rants and poetics, reflections and commentary by international voices: to support the need for a contemporary discourse always already mobile and connective, diffuse but no less concrete.

See also Final Vocabulary; Eyal Weizman: Critical Spatial Practice – The Roundabout Revolutions.
Brandon LaBelle is a musician, artist, writer, theorist, curator, educator and editor based in Berlin. His work, based on performance, sound installation, recording and use of found sounds, focuses on questions of agency, community, pirate culture, and poetics, which results in a range of collaborative and para-institutional initiatives, including: The Listening Biennial and Academy (2021-), Communities in Movement (2019-), The Living School (2014-16), Oficina de Autonomia (2017), The Imaginary Republic (2014-19), Dirty Ear Forum (2013-), Surface Tension (2003-2008), and Surface Tension (1998-2002). LaBelle reflects fluently on his artistic practice, drawing attention to the social dimensions of listening and manner in which sounds, in multiple variations, play upon public spaces, and drawing connections across media and incorporate video, as well as architectural and sculptural vocabularies into an expanded field that embraces rhetorical and spatial challenges.
In 1995 he founded Errant Bodies Press, an independent publishing house supporting work in sound art and studies, performance and poetics, artistic research and contemporary political thought.
order wishlist
published in November 2012
English edition
11,4 x 17,8 cm (softcover)
104 pages
10.00 €
ISBN : 978-0-9827439-7-3
EAN : 9780982743973
in stock