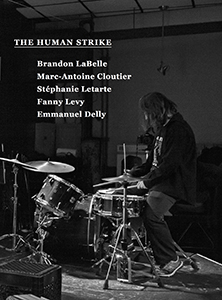 order
wishlist
This recording stems from a collaborative sound experimentation developed as part of a project to create new forms for artistic research within the university. Invited artists, musicians, and researchers produced a series of sound actions focusing on questions of community, creative resistances, sonic agency and the créolité passing between Haiti and Quebec.
The Human Strike was developed and presented as part of SON/CONTEXTE, a research framework initiated by Julie Faubert. SON/CONTEXTE arises from the desire to create new contexts for artistic research within the university: What would be the manner, specific to art, to do research? How to place students within the working process of artistic experimentation? How to give access to artistic research and experimentation in itself instead of research reports?
The artist Brandon LaBelle was invited to give form to a contextual sound experimentation in collaboration with Marc-Antoine Cloutier, Stéphanie Letarte, and Fanny Levy, from École d'art (Université Laval). Between January 29th and February 2nd, 2018, a series of musical / sonic actions and exchanges were developed and recorded at Avatar sound lab, along with Emmanuel Delly, a Hatian drummer living in Quebec City. Focusing on questions of community, creative resistances, sonic agency and the créolité passing between Haiti and Quebec, a set of five songs were produced. The final mixes were presented in a live diffusion at L'Anti Bar on February 2nd, 2018.
Brandon LaBelle is a musician, artist, writer, theorist, curator, educator and editor based in Berlin. His work, based on performance, sound installation, recording and use of found sounds, focuses on questions of agency, community, pirate culture, and poetics, which results in a range of collaborative and para-institutional initiatives, including: The Listening Biennial and Academy (2021-), Communities in Movement (2019-), The Living School (2014-16), Oficina de Autonomia (2017), The Imaginary Republic (2014-19), Dirty Ear Forum (2013-), Surface Tension (2003-2008), and Surface Tension (1998-2002). LaBelle reflects fluently on his artistic practice, drawing attention to the social dimensions of listening and manner in which sounds, in multiple variations, play upon public spaces, and drawing connections across media and incorporate video, as well as architectural and sculptural vocabularies into an expanded field that embraces rhetorical and spatial challenges.
In 1995 he founded Errant Bodies Press, an independent publishing house supporting work in sound art and studies, performance and poetics, artistic research and contemporary political thought.
order wishlist
Recorded by Simon Paradis-Dionne at Avatar, Quebec City.