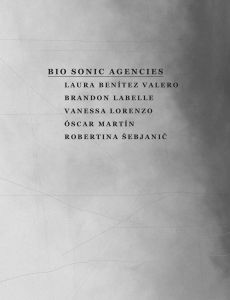 order
wishlist
A radio creation around the materiality of sound and air.
In a world dominated by the visual, could contemporary resistances be auditory? What is the materiality of sound? How does the materiality of sound affect listening? What resistances can be configured from working with biomaterials and sound? Do these bio_sonic_agencies open up other possible spaces that do not exist in the visual regime? The radio work Bio_Sonic_Agencies follows such questioning through a focus on matters of air. Air is highlighted as an elemental force that moves across human and more-than-human bodies, and that enfolds in its rather invisible and light presence a range of material expressions and dynamics. From the microscopic to the macroscopic, air is radically invasive, affirming, influential; it is profoundly internal, filling the lungs with its molecular support while passing across the planet in atmospheres and weather streams. It transitions through states of materialization and imaginaries, from gaseous ethers and contagions to radiophonic signaling and aerial poetics—air is a deep and dangerous carrier. Bio_Sonic_Agencies is the result of a collaboration between a group of artists and philosophers who work with biomaterials, ontological entanglements, sound and speculative listening. Through a process of shared discussion and sonic experimentation, the work captures a series of encounters with matters of air.
Produced for Kunstradio, Vienna, as part of Social Music II. Broadcast on March 28, 2021.

Laura Benítez Valero is an independent researcher and curator. Her research connects philosophy, art(s), and technoscience, focused on bioresistance and nonhuman agents. Head of Theory, Degree in Arts & Design, Escola Massana and lecturer in Critical and Cultural Studies. Collaborator in the seminar of Robotics and Bioengineering, Mphil, UOC. Lecturer in Technology & Design, Elisava Design School. Lecturer in Gender and Philosophy, Autonomous University of Barcelona. Guest researcher at the Ars Electronica Centre and the MACBA's Documentation Centre. She has also been invited to different international institutions such as Interface Cultures Kunstuniversität Linz, Sónar Festival (Barcelona/Hong Kong), Royal Academy of Arts London, or the University of Puerto Rico. Currently, she is the content director of the Biofriction (Creative Europe) project led by Hangar in collaboration with Bioart Society, Cultivamos Cultura, and Kersnikova Institute.

Brandon LaBelle is an artist, writer and theorist living in Berlin. His work focuses on questions of agency, community, pirate culture, and poetics, which results in a range of collaborative and para-institutional initiatives. In 1995 he founded Errant Bodies Press, an independent publishing project supporting work in sound art and studies, performance and poetics, artistic research and contemporary political thought.

Vanessa Lorenzo is a hybrid researcher and transdisciplinary designer focused on hybrid media ecologies that address intimate interdependencies between humans, more-than-humans and the technologies that interweave them in order to enable odd sympathies and post-anthropocentric futures. Part of Hackuarium biohackerspace and satellite of the Hackteria network, she currently operates from Les Ateliers de Bellevaux (Lausanne). She nourishes from and with a community of artists / doers / hackers with a sensibility to subvert the dominating role of traditional science and technology. She has presented her work at Darmstädter Internationale Ferienkurse für Neue Musik (Darmstadt, 2016), Cafe Oto (London, 2017), London Biennale (London, 2018), Ecovisionarrios at LABoral (Gijón, 2019) and HeK (Basel, 2019), La Gaité Lyrique (Paris, 2017), Azkuna Zentroa (Bilbao, 2018), Touch Me Festival (Zagreb, 2017), Fak'ugesi Festival (Johannesburg, 2019), Chronus Art Center (Shanghai, 2019), Klangmoorschopfe (Gaïs, 2017).

Óscar Martín is a sound artist, independent researcher and programmer. His practice could be understood as a knowledge device, where art, science and technology hybridize and converge from an unorthodox and experimental approach. From the sound dimension, his pieces propose to encourage active listening and expand our perception through the psychoacoustic experience of the phenomenon of the emergence of structures and patterns at the limits of chaos and order. His audio works have been published in Free Software Series, Nyapster, Drone Records and Tecnonucleo, among other labels, and have been presented live throughout Europe and Latin America. Martin is also behind the streaming platform MetaminaFNR and is co-editor of Ursonate Magazine, a publication dedicated to the Spanish music and experimental sound scene.

Robertina Šebjanič is artist / researcher working since several years on cultural, (bio)political, ecological realities of aquatic environments, which serves as a starting point to investigate and tackle the philosophical questions on the intersection of art, technology and science. Her ideas and concepts are often realized in collaboration with others, through interdisciplinary and informal integration in her work. She was awarded with Honorary Mention @Prix Ars Electronica 2016, STARTS 2020 and  STARTS 2016 nomination. Robertina was SHAPE platform 2017 artist. 2018 she was a resident artist at Ars Electronica (EMARE / EMAP). Her art work Aurelia 1+Hz / proto viva generator is since 2019 part of the the BEEP Electronic Art Collection, Spain. She exhibited / performed at solo and group exhibitions as well as in galleries and festivals: Ars electronica Linz, Kosmica festival_ Laboratorio Arte Alameda_Mexico City, La Gaîté Lyrique_ Paris, Le Cube_Paris, MONOM_ CTM Berlin, Art Laboratory Berlin, ZKM_Karlsruhe, among others.