Site of Sound – Of Architecture and the Ear (+ CD) 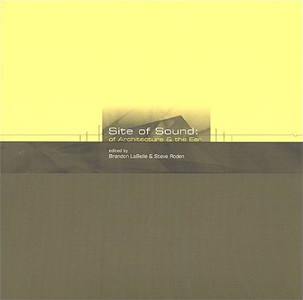 wishlist
An anthology focusing on architectural and acoustic space, sound sculpture, field/environmental investigation and recording, and site-specificity.
"Site of Sound" is an anthology focusing on current trends in experimental music, sound art and audio theories, featuring writings, visual works, interviews and artist projects by leading experimental composers, sound-artists, and architects whose work concerns itself with architectural and acoustic space, sound sculpture, field/environmental investigation and recording, and site-specificity. Complementing this are theoretical, fictional and diaristic writings by contemporary authors, cartographers and ecologists.
Architecture and Music have often been theorized as having a reciprocal relationship. 20th century composers such as Iannis Xenakis, Edgar Varese, and Karlheinz Stockhausen have composed works in relation to architecture and theories of design, and have even built specific auditoriums in which to perform their works. Further, architects (such as Bruce Goff) often constructed their designs according to musical compositions, and theories of harmony and melodic structures. Yet this relationship between sound and space, music and architecture, is often left incomplete, or only hinted at. "Site of Sound" attempts to investigate sound-art and experimental music at the point at which it addresses the relationship of site and sound.

"Site of Sound" brings together a diversity of sound-artists from around the world and from varying traditions and practices. What binds them together is a pervasive commitment to the question of space, the environment and context, in relation to sound and music. What distinguishes these artists is their direct involvement with the conditions of their surroundings, and further, how they conceive of and construct their work in relation to these surroundings. "Site of Sound" includes site-specific projects from such artists as Philip Corner, Tom Marioni and Alison Knowles, leading figures of the historical Fluxus movement; Achim Wollscheid and Ralf Wehowsky, artists from Germany and directors of the SELEKTION label, one of the most innovative labels releasing a catalogue of contemporary sound art from Europe and North America, contribute both writings and documentation of site-specific installations along with audio tracks produced specifically for the book. In addition, a site-specific work designed by Jake Tilson, a digital artist from England, presents a faux-citation (translated into four languages) for violating "noise pollution" regulations. "Site of Sound" also includes documentation of installations by German artist Christina Kubisch, Danish artist Moniek Darge, and Max Eastley, an artist and sound-sculptor from England.
These art works and projects are complemented by theoretical, diaristic and expository writings by sound artists, audio theorists and architects. From an insightful interview with Pierre Koenig discussing his obsession with music and record buying, poetic meditations by German artist Rolf Julius, Canadian artist and ecologist Hildegard Westerkamp, and Loren Chasse from San Francisco, to scientific investigations by the group WrK from Japan, an obscure group of physicists and artists whose installations and writings explore the relationship between physical phenomena, space and sound. These writings expand the long debated question of the relationship between sound and space, and lead one to a deeper consideration of the everyday occurrence of sound as a physical and psychological determinant. "Site of Sound" proposes that music has a social dimension, that it exists in relation to a listener and further, that this listener affects music through the very act of listening.
CD with works by Achim Wollscheid, Hildegard Westerkamp, John Hudak, Christof Migone, RLW, Steve Peters, Christina Kubisch, LaBelle / Roden, m/s and Toshiya Tsunoda, Jio Shimizu, Richard Lerman.