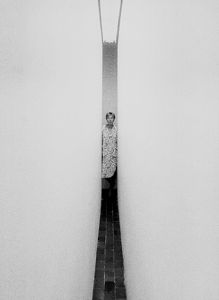 wishlist
Release of conceptual and perfomative pieces by Christina Kubisch composed & realised between 1974 and 1984, during Kubisch's years in Italy.
Six panel DVD-sized digipak, illustrated with archival photos of CK and extensive programme, notes in English. Edition of 300 copies.


TOCHNIT ALEPH · Christina Kubisch (TA158) excerpts
Christina Kubisch (born 1948 in Bremen, lives and works in Hoppegarten, Germany) studied painting, music and electronics in Hamburg, Graz, Zürich and Milano, where she graduated. Performances, concerts and works with video in the seventies, subsequently sound installations, sound sculptures and work with ultraviolet light. Her compositions are mostly electroacoustic, but she has written for ensembles as well. Since 2003 she works again as a perfomer and collaborates with various musicians and dancers.
Christina Kubisch has been a visiting professor in Maastricht, Paris and Berlin. She has been a professor for sound art at the Academy of Fine Arts, Saarbrücken, Germany, from 1994 to 2013. She is a member of the Akademie der Künste Berlin since 1997.
wishlist
published in October 2020
sold out
table of contents