Jalal Toufic (born 1962 in Beirut or Baghdad, lives and works in Istanbul) is a Lebanese thinker, writer, and video artist. He is the author of Distracted (1991; 2nd ed., 2003), (Vampires): An Uneasy Essay on the Undead in Film (1993; 2nd ed., 2003), Over-Sensitivity (1996; 2nd ed., 2009), Forthcoming (2000), Undying Love, or Love Dies (2002), Two or Three Things I'm Dying to Tell You (2005), ‘Âshûrâ': This Blood Spilled in My Veins (2005), Undeserving Lebanon (2007), The Withdrawal of Tradition Past a Surpassing Disaster (2009) and Graziella: The Corrected Edition (2009). He co-edited the special Discourse issue Gilles Deleuze: A Reason to Believe in this World, and edited the special Discourse issues Middle Eastern Films Before Thy Gaze Returns to Thee and Mortals to Death. He has taught at the University of California at Berkeley, California Institute of the Arts, the University of Southern California, and, in Lebanon, Holy Spirit University; and he currently teaches at Kadir Has University in Istanbul. 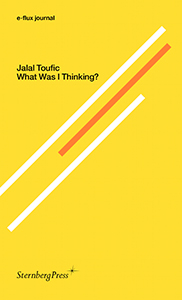 E-flux journal – What Was I Thinking?
2017
English edition
Sternberg Press - E-flux journal
In this treatise, Jalal Toufic investigates the arts as the privileged site of thinking and confronts his thoughts with texts taken from the traditional religions and mystics of the past. 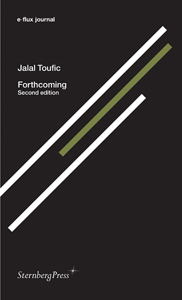