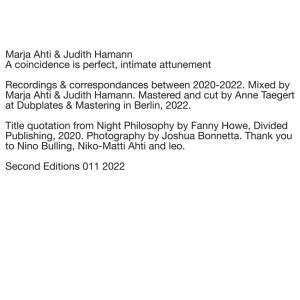 order
wishlist
A wonderful sophomore collaborative work pieced together over two years of changing seasons, ideas, moods, and feelings.
The release is formed from a shifting field of sound correspondence that pivots on moments of coincidence, of a tuning in. What are we opening ourselves to when we tune in to sound? How can one be truly open to a sound? How can the activity of recording move beyond notions of capture and release into more generative frames? Rather than a tool purposed for preservation or "conservation" of memory, of time and place, can recording sound instead form new vibrant or vibratory spaces of attunement? "A Coincidence..." is an LP length composition of multiple interlocking parts, created through exchange, alignment, unpredictability: the title borrowed from poet Fanny Howe falling right into place, a flock of birds in flight, pitches matched and moved across different geographies and temporal frames. Marja Ahti & Judith Hamann have created an intuitive, lyrical longform piece that considers the idea of attunement itself as, in some sense, the smallest form of measure or denominator connecting their respective practices: across field recording, just intonation, electronic sonorities and instrumental bodies. "A coincidence..." reflects a sense of a willingness to tune in to impulses given, or gifted to the other, a position that embraces an intimate synchronicity.
Judith Hamann: cello, voice, field recordings, synthesizer, organ.
Marja Ahti: field recordings, synthesizers, organs, piano.


Second Editions · 011 - Marja Ahti & Judith Hamann - excerpt
Marja Ahti (born 1981) is a Swedish-Finnish composer and sound artist based in Turku, Finland. Ahti works with field recordings and other acoustic sound material combined with synthesizers and electronic feedback in order to find the space where these sounds start to communicate. She makes music that rides on waves of slowly warping harmonies and mutating textures—rough edged, yet precise compositions, rich in detail.
Ahti has presented her music in many different contexts around Europe, in Japan and the United States. She is active in the duo Ahti & Ahti with her partner Niko-Matti Ahti and in the artist/organizer collective Himera.
Judith Hamann is a cellist and performer/composer from Naarm/Birraranga (Melbourne), Australia, now based in Berlin. She has “long been recognised as one of Australia's foremost contemporary-music cellists” (RealTime Arts). Her performance practice stretches across various genres encompassing elements of improvised, contemporary classical, experimental, and popular music. Currently her work is focused on an examination of expressions and manifestations of 'shaking' in her solo performance practice, a collection of new works for cello and humming, and ongoing research surrounding “collapse” and the “de-mastering” of instrumental practice.
Judith Hamann has studied contemporary classical repertoire with renowned cellists including Charles Curtis and Séverine Ballon, as well as developing a strong practice in improvisation and sonic arts through collaborative projects both in Australia and internationally. She has worked with artists and ensembles including Australian Art Orchestra, Oren Ambarchi, Dennis Cooper, ELISION ensemble, Sarah Hennies, Graham Lambkin, Alvin Lucier, Toshimaru Nakamura, The Necks, Áine O'Dwyer, Stephen O'Malley, Eliane Radigue, James Rushford, Wadada Leo Smith, Ilan Volkov, Tashi Wada, La Monte Young and Marian Zazeela. She is a member of Golden Fur, Hammers Lake, The Argonaut String Quartet, the Harmonic Space Orchestra, and has duo projects with Rosalind Hall, Anthea Caddy, and Lori Goldston.
Judith Hamann is a champion of new and rarely performed music, immersive approaches to sound, and engages with a range of interdisciplinary and experimental projects including collaborative work with visual artists Keith Deverell, Sabina Maselli, and film makers Joshua Bonnetta and Benedetta De Alessi.
She has performed or composed music released on labels including Blank Forms, Black Truffle, Saltern, Pogus, Another Timbre, Caduc, and Marginal Frequency.
order wishlist
Mixed by Marja Ahti & Judith Hamann.
Mastered and cut by Anne Taegert at Dubplates & Mastering, Berlin.
published in November 2022
23.00 €
EAN : 0880918257556
in stock