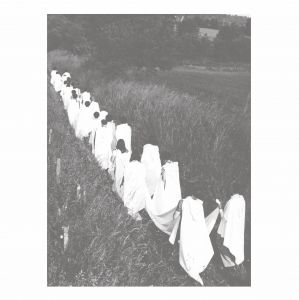 wishlist
A major turning-point in the sonic oeuvre of Eliane Radigue.
Finished in 1970, it was the last work composed with feedback materials. From that experimental period, Opus 17 preserves a plastic character: a music made of rough sonic phenomena, at once harsh and granular, possessing a quality of materiality and tactility. Its vibrations structure the air surrounding the listener with densities, thicknesses, indeed with palpable movement. Her compositions are frames which let us hear these phenomena, open frameworks from the sonic installations of her Endless Musics and here reinserted in the five scenes making up Opus 17. In 1970, in her studio of very rudimentary means, Eliane Radigue developed a completely unique body of work centered on sounds produced by feedback. Opus 17 has the quality of showing off the sum of the achieved techniques and methods.
Éliane Radigue (born 1932 in Paris) is considered one of the most innovative and influential contemporary composers, from her early electronic music through to her acoustic work of the last fifteen years. Influenced by musique concrète and shaped by regular sojourns in the United States, where she discovered analogue synthesisers, her work unfolds an intensity which is at once subtle and monumental. Through her deep reflections on sound and listening, not only her music but also her working methods have come to shape a widely resonating set of new parameters for working with sound as musical material.
wishlist
Published by Important Records.
2022 (publication expected by 1st quarter)
forthcoming