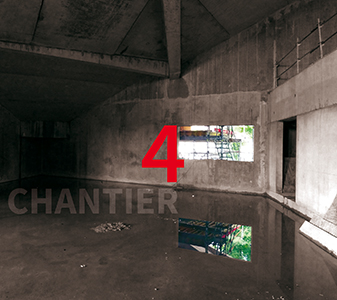 order
wishlist
Chantier is a collective project with Pascal Battus on found objects, Bertrand Gauguet on saxophone, and Eric La Casa on microphones. The trio's proposal is to develop a sound practice created on building sites, amongst the machines and the builders. The fourth part of this project was recorded on the building site of the Philharmonie in Paris.
“Since 2010, the building site has been a space where we question our practice, like workers. Improvising with the background noise of the site, the myriad sounds of machines, the gestures and words of the workers, our research unfolds over multiple sound territories, ranging from acoustics to anthropology.”
Pascal Battus is a French sound artist, musical improvisor, and composer.
Bertrand Gauguet is a musician trudging through a practice without hierarchy involving sound and music: as an improvising saxophonist, composer of electronic music and as a sounds collector. He has been playing since the early 2000s the alto saxophone in contexts of solo and group improvisation. His approach to the saxophone explores extended techniques, multiphony and microphony. He has been programmed in numerous festivals of new and experimental music in France and abroad (Europe, USA, Japan…). Collaborations includes Éliane Radigue, John Tilbury, Robin Hayward, Eddie Prevost, Franz Hautzinger, Thomas Lehn, Xavier Charles, Sophie Agnel, Andrea Neumann, Pascal Battus, Eric La Casa, Robin Hayward, Michel Doneda, l'Insub Meta Orchestra, Seijiro Murayama, Tetuzi Akiyama, Toshimaru Nakamura, John Butcher, Axel Dörner, Isabelle Duthoit, Catherine Contour…
Bertrand Gauguet runs the label Akousis Records.
For more than 20 years, while listening to the environment, Éric La Casa (born 1968, Tours, lives and works in Paris) has been questioning the perception of reality and has expanded the notion of what's musical today. Through his aesthetic of capturing sound, his work fits equally into the fields of sound art and music. As a result of his in situ listening processes, he creates forms (of attention) that creep into the venues, slowly infuse there, and become other possible spaces. In the same way that the letter stimulates a country's reading, the in situ aesthetic object renews our relationship to space and landscape.
order wishlist
published in May 2018
CD digisleeve + booklet (texts in English and French)
3 tracks (64'45)
12.00 €
ISBN : 978-2-9559581-2-4
EAN : 9782955958124
in stock