Robin Hayward (born 1969 in Brighton, England) is a tuba player and composer based in Berlin. Since the 1990s, he has been concerning himself with experimental and radical playing techniques on brass instruments, initially through the discovery of the “noise-valve”, later through development of the first fully microtonal tuba in 2009. In 2012, he invented the Hayward Tuning Vine as an interface for exploring the harmonic space implicit within the instrument, which exists both as a software version and as a physical prototype. Hayward's microtonal tuba and, on some occasions, the tuning vine have appeared on numerous recordings with various ensembles, e.g. Tonaliens—who have released a double LP on Edition Telemark in 2017—, Chora(s)san Time-Court Mirage, and Microtub. 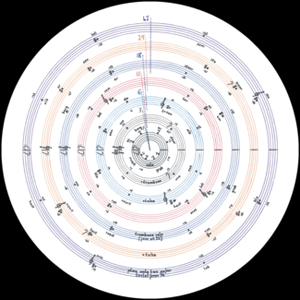 Words of Paradise (vinyl LP – Picture Disc)
2019
Edition Telemark
A composition for brass chamber ensemble that explores the origins of language and its relationship with music.