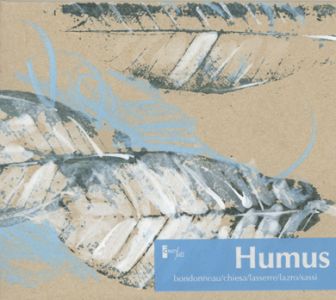 order
wishlist
An improvised performance with Benjamin Bondonneau (clarinet), David Chiesa (double bass), Didier Lasserre (drums), Daunik Lazro (baritone saxophone) and Laurent Sassi (sound).
Benjamin Bondonneau (born in 1975 in Sarlat) is a French artist and clarinetist active on the free improvisation scene. He has collaborated with Daunik Lazro, Michel Doneda, Barre Phillips, Lê Quan Ninh, Raymond Boni, David Chiesa, Benjamin Maumus, Sébastien Cirotteau, François Rossé, Fabrice Charles, Géraldine Keller, Raphaël Saint-Remy...
French musician David Chiesa (double bass, electric bass and piano frame) has been active on the international improvised scene since 1997. He is the co-founder with Michel Doneda of the Ensemble Nodal. As an improviser, he has played with a great number of musicians and has been nourishing his work for a long time with an intimate relationship with other practices such as dance (with Fine Kwiatkowski, Yukiko Nakamura, Masaki Iwana...), poetry (with Charles Pennequin, Ly Thanh Tien. ..), experimental cinema (with Gaelle Rouard, Xavier Quérel, Etienne Caire...) or light (with Christophe Cardoen, Sébastien Perroud, Michael Vorfeld...), visual arts or theater. He is also strongly influenced by the articulations of electroacoustic music with which he works regularly.
Didier Lasserre (born 1971 in Bordeaux) is a French drummer and percussionist. His musical roots are in free jazz and improvisation. In a paradoxical way with respect to his activity as a "free" percussionist, he has always been interested in what is commonly known as silence, as well as in very soft dynamics, worked as a passageway to access this silent zone.
Daunik Lazro (born in 1945 in Chantilly, France) is an eminent jazz and improvised music saxophonist, a major figure of the European avant-garde music scene. He has played and recorded with countless groups and musicians, such as Joëlle Léandre, Evan Parker, Michel Doneda, Georges Lewis…
Laurent Sassi (born 1973 in Abidjan, lives and works in Rabastens, France) explores sound in relation to a variety of contemporary fields: improvisation, instrumental and electronic music, phonography and the art of sound in the theatre.
order wishlist
Published with Amor Fati.
published in 2008
10.00 €
in stock