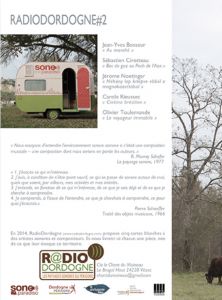 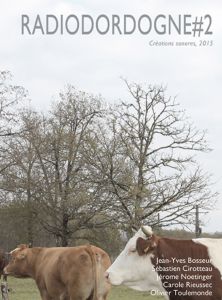 order
wishlist
In 2015, the web radio RadioDordogne (http://www.radiodordogne.com) offers five carte blanche to sound artists and composers. They each deliver a piece, born from what the territory evokes to them.
Jérôme Noetinger (born in 1966 in Marseille) is a composer and improviser of electroacoustic music, founder of the label and distribution platform Metamkine (which he ran from 1987 to 2018), member of the editorial board of the magazine Revue & Corrigée (from 1989 to 2014). A long-time collaborator of Lionel Marchetti and Mathieu Werchowski, he has performed with Nachtluft, Voice Crack, Tom Cora, Michel Doneda, Lê Quan Ninh, Martine Altenburger, Emmanuel Petit, Marc Pichelin, Jean Pallandre, Dominique Répécaud, Peter Hollinger, Keith Rowe, MIMEO, Giuseppe Ielasi, eRikm, etc.

See also Thymolphthalein (Natasha Anderson, Will Guthrie, Jérôme Noetinger, Anthony Pateras & Clayton Thomas).
Jean-Yves Bosseur (born 1947, Paris) is a music composer, musicologist and writer. He studied composition at the Rheinische Musikschule in Cologne (Germany) with Karlheinz Stockhausen and Henri Pousseur, and graduated with a PhD in Philosophy of Art at University of Paris I. Director of Research at C.N.R.S and Professor of musical Composition at the CNR of Bordeaux, he received awards from Fondation Royaumont (France) and Gaudeamus Foundation (Netherlands).
Sébastien Cirotteau (born in 1977 in Toulouse) is a French trumpet player and improviser. He is a member of the Quatuor Cassini. He has also directed several sound documentaries.
Olivier Toulemonde is a French sound artist. His work revolves around the question of sound, its perception and propagation.
Carole Rieussec is a composer of electroacoustic music and a performer living in Frontignan, France.
order wishlist
published in 2015
12.00 €
in stock