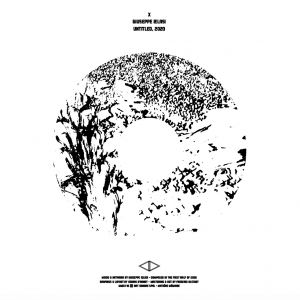 order
wishlist
Giuseppe Ielasi experiments for the MMXX series with edgy and unpredictable rhythmic elements, buzzing tones and unusual environments.
This record is part of the MMXX Series. In anticipation of the year 2020, Matière Mémoire asked 20 experimental/electronic artists to create an original 20 minutes piece and an artwork. Each record is limited to 500 copies and comes as a crystal clear vinyl featuring an original track of 20 minutes on one side, and a laser engraved artwork on the other. Each 12" is housed in a transparent sleeve printed with the MMXX logo, coming with a print of the artist artwork.

Giuseppe Ielasi (born in 1974, lives near Milan since 1990) started playing guitar in 1988, and worked for many years in the area of “improvised music” (long term collaborations with Renato Rinaldi in the duo Oreledigneur, Thomas Ankersmit, Michel Doneda, Ingar Zach, Dean Roberts).
Between 1997 and 2006 he has performed live with Taku Sugimoto, Jérôme Noetinger, Mark Wastell, Martin Siewert, Nmperign, Brandon Labelle, Nikos Veliotis, Alessandro Bosetti, Gert-Jan Prins, Phill Niblock, Oren Ambarchi, and many others.
From 2007 on, his main interest has been in site-specific solo performances, still using guitars as primary sound sources but integrating microphones and multi-channel speaker systems in order to create complex networks for sound diffusion in relationship to space.
He recently started a collaboration with Austrian video artist Michaela Grill (US tour in 2007, participations at the Rotterdam Film Festival, Evolution Festival in Leed, FilmSoundFilm in Marfa,TX) and is more and more involved in performances and installations with Renato Rinaldi and Armin Linke (ZKM Karlsruhe, Villa Romana Florence, Kunsthalle Berlin, Festival della Scienza Genova).
In 1998 he founded the “Fringes recordings” label, closed in 2005, and co-founded “Schoolmap Records” in 2006.