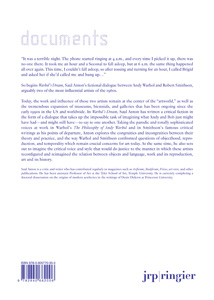 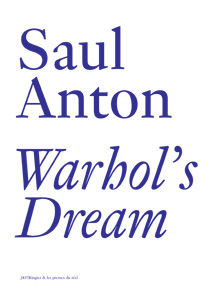 order
wishlist
Saul Anton describes an imaginary encounter between Robert Smithson and Andy Warhol, wandering for an entire day through an empty New York city, dicussing about entropy, glamour, science-fiction, cinema, and the art of their times. An highly informative and witty essay on both artists' works in the form of a fiction by the art critic.
“It was a terrible night. The phone started ringing at 4 a.m., and every time I picked it up, there was no one there. It took me an hour and a Seconal to fall asleep, but at 6 a.m. the same thing happened all over again. This time, I couldn't fall asleep, so after tossing and turning for an hour, I called Brigid and asked her if she'd called me and hung up…”
So begins Warhol's Dream, Saul Anton's fictional dialogue between Andy Warhol and Robert Smithson, arguably two of the most influential artists of the 1960s. Today, the work and influence of these two artists remain at the center of the “artworld,” as well as the tremendous expansion of museums, biennials, and galleries that has been ongoing since the early 1990s in the US and worldwide. In Warhol's Dream, Saul Anton has written a critical fiction in the form of a dialogue that takes up the impossible task of imagining what Andy and Bob just might have had – and might still have – to say to one another. Taking the parodic and tonally sophisticated voices at work in Warhol's The Philosophy of Andy Warhol and in Smithson's famous critical writings as his points of departure, Anton explores the congruities and incongruities between their theory and practice, and the way Warhol and Smithson confronted questions of objecthood, reproduction, and temporality which remain crucial concerns for art today. At the same time, he also sets out to imagine the critical voice and style that would do justice to the manner in which these artists reconfigured and reimagined the relation between objects and language, work and its reproduction, art and its history.
Pamela M. Lee is Professor in the Department of Art and Art History at Stanford University. She is the author of Object to Be Destroyed: The Work of Gordon Matta-Clark (2000) and Chronophobia: On Time in the Art of the 1960s (2004), both published by the MIT Press.
Saul Anton has written for Artforum, Frieze, Parkett, and many other magazines. He has taught critical studies at the City University of New York and the Tyler School of Art, Temple University. He is also the translator of Jean-Luc Nancy's The Discourse of the Syncope: 1. Logodaedalus (2008), and is currently completing a doctoral dissertation on the relation between aesthetics and history in French Enlightenment philosophy and literature at Princeton University.
order wishlist
Edited by Xavier Douroux.
Introduction by Pamela M. Lee. 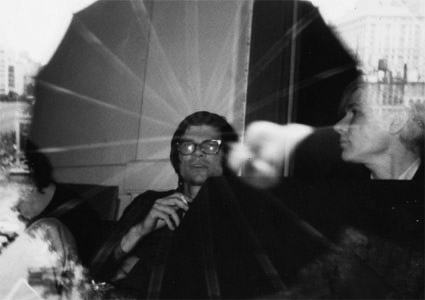 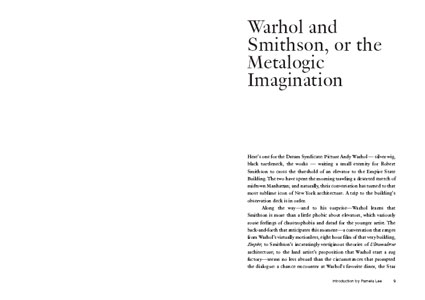 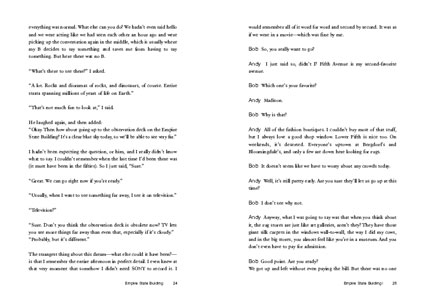