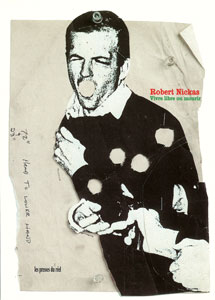 order
wishlist
Bob Nickas' writings.
Robert Nickas is a critic, freelance curator, and editor of the Index magazine (New York). He is also one of the free spirits who were nurtured by the libertarian punk slogan "do it yourself". In this collection, covering twenty years of activity, Nickas combines humour with intellectual rigor, as well as a reliable historical memory to broach works of personalities as diverse as Maurizio Cattelan, Felix Gonzalez-Torres, Cady Noland, John Miller, Haim Steinbach or Andy Warhol, by way of David Cronenberg, Melvins, Père Ubu and numerous others, also slipping in untimely observations on the alleged death of painting, the "Golden 80s" of New York art world, and the role of the exhibition curator.
Working independently, Robert Nickas has realized more than forty exhibitions for galleries and museums since 1984. He recently co-curated the Biennale of Lyon in France (with the Consortium team), is an editor of Artforum, and a Guest Curator at P.S.1 in New York.
His writings and interviews have appeared in Afterall and Sound Collector, as well as in numerous catalogues and monographs - Felix Gonzalez-Torres, On Kawara, Olivier Mosset, Cady Noland, Andy Wharol.
order wishlist
Introduction by Christophe Cherix.
published in 2000
English edition
15 x 21 cm (softcover)
176 pages (30 b/w ill.)
12.00 €
ISBN : 978-2-84066-038-5
EAN : 9782840660385
in stock
download an excerpt in PDF:
Christophe Cherix - An Introduction / Olivier Mosset: Some Thoughts About Values / The Sublime Was Then (Search for Tomorrow) (p. 6-23)
table of contents