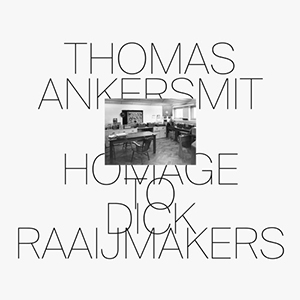 pre-order
For his first record in 6 years, Thomas Ankersmit pays homage to the late legendary Dutch composer, electronic and tape music pioneer, and multimedia artist Dick Raaijmakers. Inspired by Raaijmakers's composition and recording techniques, Ankersmit exclusively used analogue devices, creating three-dimensional and holophonic sound fields.
Thomas Ankersmit's new album for Shelter Press “Homage to Dick Raaijmakers” is an all-analogue electronic music composition inspired by legendary Dutch composer / electronic and tape music pioneer / multimedia artist Dick Raaijmakers (1930-2013). The work takes inspiration from Raaijmakers' music from the 1960s, his texts on sound composition like “Cahier M”, and notes on his own music. On this recording Ankersmit plays Serge Modular feedback and sine/pulse/random generators, contact mic, and tape speed variation
Mirroring some of Raaijmakers' work, Ankersmit plays his Serge synthesizer as a kind of weather system. He references storms, thunder, crashing and falling objects, and distant radio transmissions in his electronic sounds, as well as dragging a contact mic across his equipment. Despite the abstract nature of the material, a sense of loss or mourning sometimes emerges from the music.
With his homage Ankersmit re-contextualizes Raaijmakers' ideas about electric sound, composition, and spatial experience. Like Raaijmakers himself Ankersmit exclusively uses analogue devices, such as sine/pulse/random generators, modulators, filters, and especially feedback processes between them.
The music focuses on the sounds of raw electricity through creatively abused electronics, composing with analogue micro-sounds, and the creation of three-dimensional sound fields.
The piece also uses tones produced by the listener's own ears, inspired by Raaijmakers' thoughts on “holophonic” sound fields to be individually explored by the listener. With this phenomenon, the listener's inner ears actively generate sounds that don't exist in the recorded signal, and which can change with a small movement of the head.
“Homage to Dick Raaijmakers” was commissioned by Sonic Acts and was premiered live at the Stedelijk Museum in Amsterdam in February 2016. Ankersmit also dedicates the work to his father Thijl Ankersmit (1947-2016), who first demonstrated feedback to him.
Also available in vinyl.
Thomas Ankersmit (born 1979 in Leiden, Netherlands, lives and works in Amsterdam and Berlin) is an electronic musician and composer. He plays the Serge Modular synthesizer, both live and in the studio, and collaborates with artists like Phill Niblock, Kevin Drumm, and Valerio Tricoli. His music combines intricate sonic detail and raw electric power, with an extremely physical and spatial experience of sound. Acoustic phenomena such as infrasound and otoacoustic emissions (sounds emanating from inside the head, generated by the ears themselves) play a central role in his work, as does a deliberate misuse of the equipment.
His work has been presented at Hamburger Bahnhof and KW Institute for Contemporary Art, Berlin; Stedelijk Museum, Amsterdam; Kunsthalle, Basel; Tate Modern, London; Serralves Museum, Porto; MoMA PS1, New York; and at festivals for experimental and contemporary music all over the world. He's also lectured at universities like Harvard, Stanford, CalArts, and Goldsmiths. Ankersmit's music is released on the PAN, Touch, and Shelter Press labels.
pre-order
Graphic design: Bartolomé Sanson.
published in September 2018
CD digipack
1 track (35'19)
13.00 €
currently out of stock