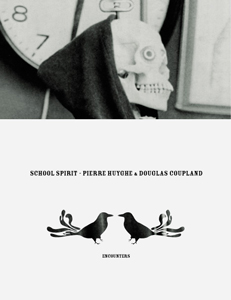 order
wishlist
An artistic and literary journey through the soul of a dead and disembodied student, lost in the memories and infrastructure of a Californian High school.
Also available in English edition.
The photographs, videos and installations produced by Pierre Huyghe (born 1962 in Paris, where he lives and works) question the conditions of representing reality and the shifts of meaning they give rise to. By using the aesthetics of an underrated daily round, the artists suggests the limits of our knowledge, based restrictively on the interpretation of the world. Situated somewhere between reality and make-believe, and steeped in the cinematographic world (repeats, remakes, and so on), his videos lead the viewer to question his own vision of the things surrounding him, and his relation to collective memory.
Douglas Coupland (born 1961 in Baden Söllingen, Gemrany) is a Canadian writer, visual artist, and designer. His first novel, Generation X, was an international bestseller. He has published fourteen novels, two collections of short stories, and seven nonfiction books; written and performed for the Royal Shakespeare Company; and has penned a number of works for film and television. He is a regular contributor to the New York Times, Wired magazine, and the Financial Times.
order wishlist
published in October 2002
French edition
16,5 x 21,5 cm (softcover)
160 pages (170 color & b/w ill.)
29.00 €
ISBN : 978-2-914563-12-3
EAN : 9782914563123
in stock