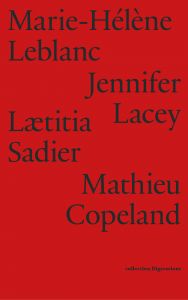 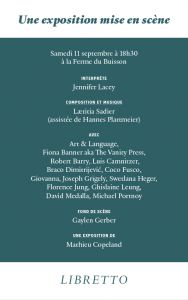 order
wishlist
Crossed interviews around the project of the curator Mathieu Copeland, who transposes the exhibition to the stage for the duration of a show, pursuing his investigation into the nature of an exhibition, accompanied by a libretto that gathers the transcriptions of the texts of the thirteen invited artists.
Descriptions of dreamed, real, or vanished artworks written by a dozen artists for A Staged Exhibition are interpreted through gestures, words and music by choreographer and dancer Jennifer Lacey and composer and musician Laetitia Sadier against a backdrop by Gaylen Gerber.
Following A Choreographed Exhibition, presented at the Contemporary Art Centre in 2008, and the book and the festival Choreographing Exhibitions in 2013, curator Mathieu Copeland proposes A Staged Exhibition (Une exposition mise en scène). Working with the theatre's spatial and temporal parameters, Copeland experiments and collaborates with Lacey and Sadier to interrogate the way works are articulated from one to the other, confronted in their singularity and interpreted as a tableau vivant that transposes works by an international and intergenerational grouping of artists including Art & Language, Fiona Banner, Robert Barry, Luis Camnitzer, Braco Dimitrijević, Coco Fusco, Giovanna, Joseph Grigely, Swetlana Heger, Florence Jung, Ghislaine Leung, David Medalla, and Michael Portnoy.
Jennifer Lacey pursues her investigation in breaking free from the spectacular to find a playful and inventive hermeneutics of the body as she performs written or described works commissioned specifically for A Staged Exhibition. Laetitia Sadier enters into resonance, or dissonance, with the exhibition taking place in parallel to offer a sound exhibition within a staged one. In a minimalist setting, American artist Gaylen Gerber creates–for the first time in his career–a work for a theatrical context. Invited to reinterpret what a theatrical backdrop can be, Gerber continues his decades-long exploration of Backdrops and how they draw attention to the works presented and to their presentation.
Shedding the physical reality of the object, A Staged Exhibition focuses on the emotional experience of a work, lived in the present tense as an exhibition that exists solely through the prism of the lived actions. Fundamentally influenced by the art of Robert Barry—whose own oeuvre conveys the feeling of art without ever fully revealing it—A Staged Exhibition offers the mediation of works of art that occur only in their interpretation.
Published on the occasion of the show A Staged Exhibition at the Ferme du Buisson, Noisiel, in 2021.
Curator and publisher (Mathieu Copeland Editions), Mathieu Copeland (born 1977) lives and works in London. Graduate from the London Goldsmiths College, he curated, among others, the exhibitions Voids (with Laurent Le Bon, John Armleder, Gustav Metzger, Mai-Thu Perret and Clive Phillpot) at Centre Pompidou and Kunsthalle Bern in 2009, Soundtrack for an Exhibition and Alan Vega at Musée d'Art Contemporain de Lyon, Expart-Art Centre / EAC (with Brian Eno, Pierre Huyghe, Ben Kinmont, Claude Lévêque, Didier Marcel, Olivier Mosset, Shimabuku, Dan Walsh, and Ian Wilson) at ICA, London, Musée d'Art Contemporain de Lyon, Museum Sztuki Lodz, CAC Vilnius, Kunstihoone Tallinn, and Bizart Shanghai, Meanwhile… Across Town (with Cerith Wyn Evans) at Centre Point Building, London. He participated at the 9th Lyon Biennal. In 2002, Mathieu Copeland has launched Anna Sanders Films World Tour (a program of films by Charles de Meaux, Dominique Gonzalez-Foerster, Pierre Huyghe et Philippe Parreno). He is the editor of the book Anna Sanders Films – The In-Between, published by Les presses du réel.

See also Alexandra Baudelot: Jennifer Lacey & Nadia Lauro – Dispositifs chorégraphiques.
Lætitia Sadier (born 1968 in Vincennes, lives and works in London) is a singer and musician. She co-founded Stereolab with guitarist Tim Gane in 1990. She formed Monade in 1996 and has been pursuing a solo career since 2010.
order wishlist
Edited by Valérie Cudel and Mathieu Copeland. 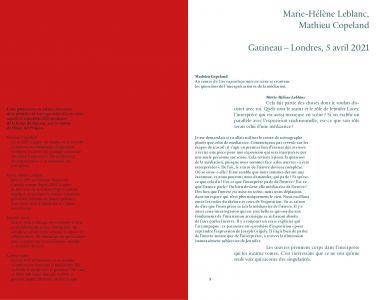 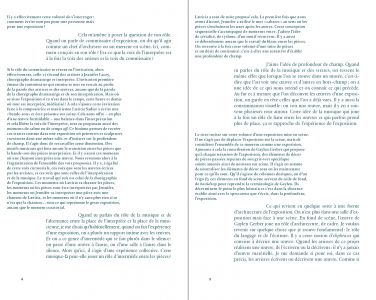 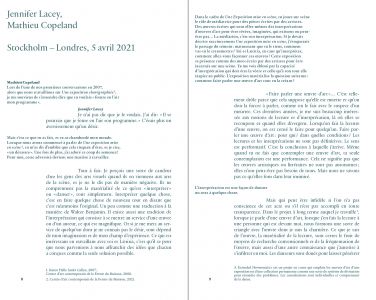 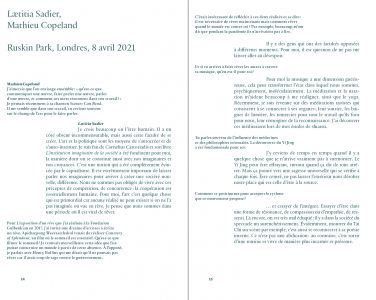 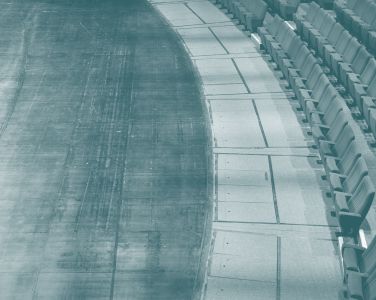 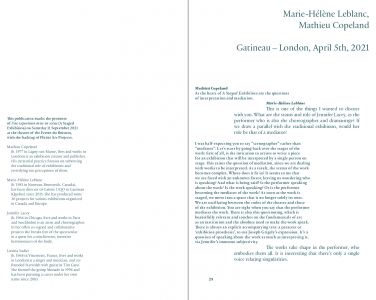 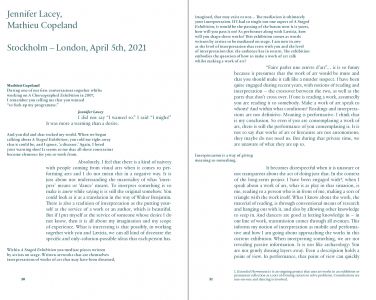 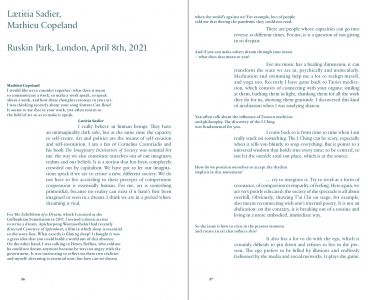 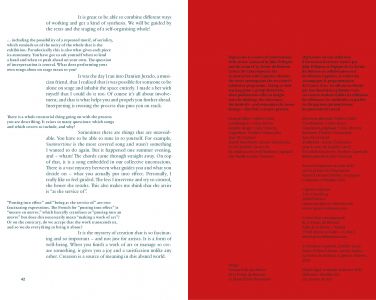 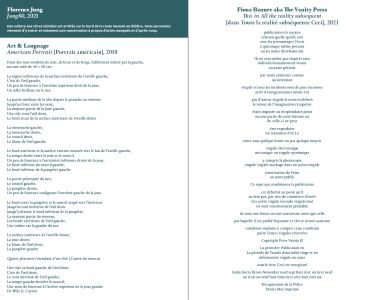 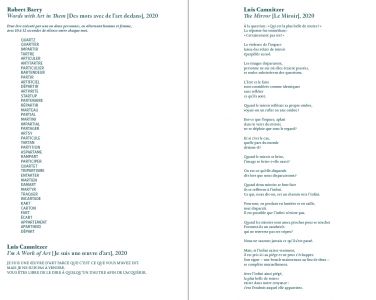 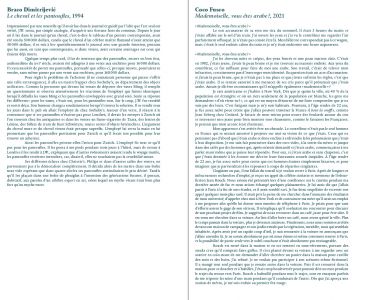 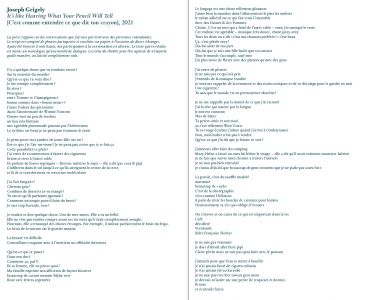 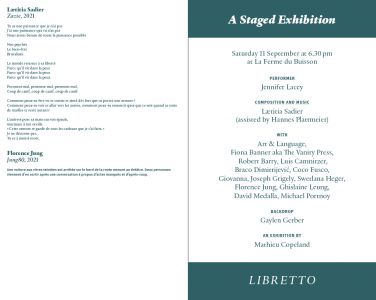 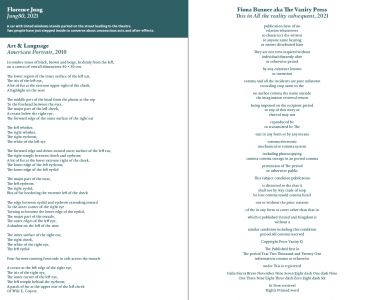 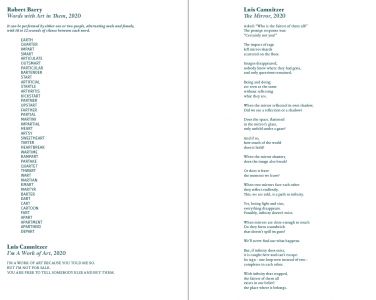 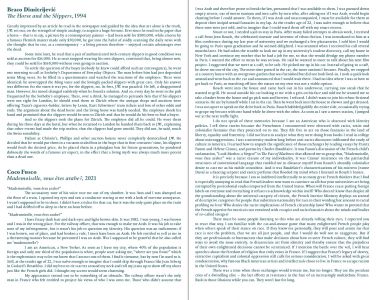 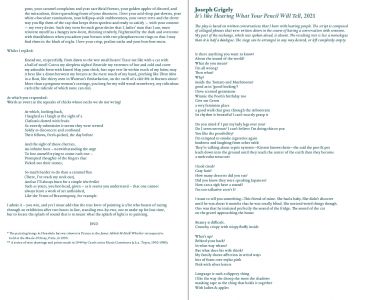