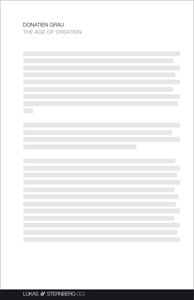 order
wishlist
The entrance of art into culture at large.
In the last two hundred years, “art” has become one of the most fetishized concepts in Western civilization. The idea according to which certain people—also known as artists—would provide the world with their inner vision is a modern myth, but has proved to be a contemporary reality. Today, this post-Romantic conception is challenged by recent geographical and demographic explosions. Being an artist is often seen as an activity, a position, even a “job”—contrary to its first definition at the beginning of the nineteenth century.
The Age of Creation analyzes the entrance of art into culture at large. Since so much art now considers itself as cultural production, mystical creation has been turned into a minority paradigm. Creation does not intend to embrace culture, but actually to address it and engage in a conversation between the world and its participants. As such, it paves the way for a perpetual reinvention of human life.
A former student from the Ecole Normal Supérieure, Paris, Donatien Grau is a literary graduate from the Political Studies Institute, Paris, and an art critic and writer. He teaches Literature at the Sorbonne University in Paris, writes for several magazines, and is contributing editor of Flash Art magazine. He is interested in the communication of classical culture and the connections between art and literature.
Donatien Grau has edited Olivier Zahm's collection of texts Une avant-garde sans avant-garde – Essai sur l'art (Les presses du réel & JRP|Ringier).
order wishlist
Forewords by Maurizio Cattelan, Douglas Coupland, and Carsten Höller.
published in September 2013
English edition
11 x 17 cm (softcover)
130 pages
15.00 €
ISBN : 978-3-943365-33-7
EAN : 9783943365337
in stock