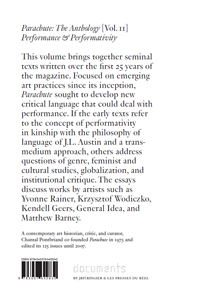 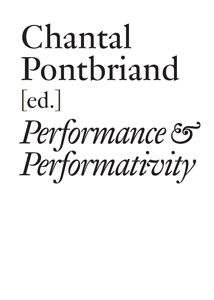 order
wishlist
Second volume of the anthology (1975-2000), focusing on performance and performativity.
In 1975, a small group of enterprising, discontented members of the international art community in the Canadian province of Quebec posed the following question: "What do we know of contemporary art outside of Quebec, in Canada or abroad? Do we even know what contemporary art exists in Montreal? How does information about art circulate?" By way of an answer, the artistically unconventional and theoretically cutting-edge magazine "Parachute" was launched, founded by Chantal Pontbriand and France Morin.
Artists such as Jeff Wall, Bill Viola, Stan Douglas, Eija-Liisa Ahtila, and many others, had the first significant critical reception of their work in "Parachute." Similarly, figures such as Douglas Crimp, Thomas Crow, Thierry de Duve, Georges Didi-Huberman, Hal Foster, Reesa Greenberg, Serge Guilbaut, and Laura Mulvey, all of whom have helped define the parameters of art history, theory, and practice, published rigorous, highly pertinent essays in the journal early on in their careers.
This volume brings together seminal texts written over the first 25 years of the magazine. Focused on emerging art practices since its inception, Parachute sought to develop new critical language that could deal with performance. If the early texts refer to the concept of performativity in kinship with the philosophy of language of J.L. Austin and a trans-medium approach, others address questions of genre, feminist and cultural studies, globalization, and institutional critique. The essays discuss works by artists such as Yvonne Rainer, Krzysztof Wodiczko, Kendell Geers, General Idea, and Matthew Barney.
A contemporary art historian, critic, and curator, Chantal Pontbriand co-founded Parachute in 1975 and edited its 125 issues until 2007. 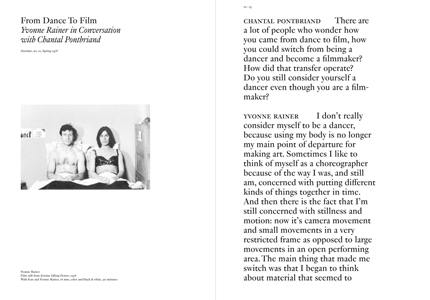 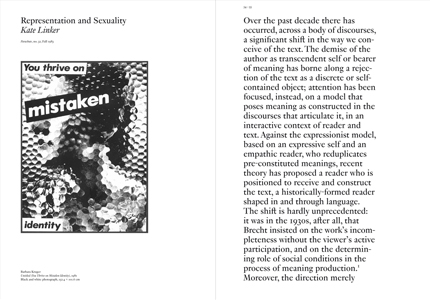 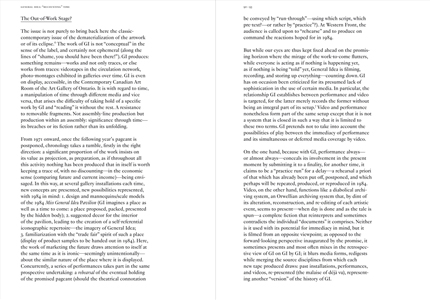