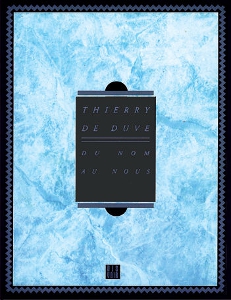 order
wishlist
The critical importance of the theme of “designation” in arts and its gradual emergence in the thinking of Thierry de Duve since 1985.
What could be more deprived, more wanting than the situation of the art enthusiast, of the lover who judges not on the basis of some theory or historical project or other, but on the basis of his own feeling and dissent ?
“Seven essays spanning the decade from 1985-1995, chosen because they outline a turn in my reflection on art, a turn still unsure of itself and leading to no definite way out, but which acquires its meaning through a pessimistic and yet militant questioning as to the future of art. (…).”—Thierry de Duve
Thierry de Duve (Born Saint-Trond, Belgium, 1944) teaches aesthetics and art history at Lille 3 University, France.
order wishlist
published in October 1995
French edition
16,5 x 21,5 cm (softcover)
160 pages
19.00 €
ISBN : 978-2-906571-49-5
EAN : 9782906571495
in stock