Since the late 1980s, Stan Douglas (born 1960 in Vancouver, where he lives and works) has created films, photographs, and installations that reexamine particular locations or past events. His works often take their points of departure in local settings, from which broader issues can be identified. Making frequent use of new as well as outdated technologies, Douglas appropriates existing Hollywood genres (including murder mysteries and the Western) and borrows from classic literary works (notably, Samuel Beckett, Herman Melville, and Franz Kafka) to create ready-made contextual frameworks for his complex, thoroughly researched projects. 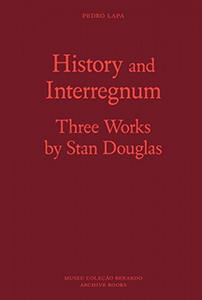 History and Interregnum – Three works by Stan Douglas
2015
English edition
Archive Books
An embracive and well-documented overview of three works by Stan Douglas covering the emergence of political and multicultural emancipation projects during the Seventies, from Portugal's 1974 revolution and the end of colonialism, to the emergence of multicultural music such as jazz-rock, funk, disco, and afrobeat.