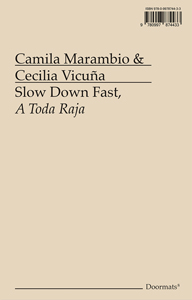 order
wishlist
In this brilliant intergenerational dialogue curator Camila Marambio and Cecilia Vicuña, one of the most intriguing Indoamerican artists of our times, converse about mestizaje/miscenegation, ecological disaster, eroticism and decolonization in their multilingual, subversive and irreverent humorous slang.
The result is a unique book that presents a conversation that is both poetic and critical. The particular dialogue presented in the book crosses over from Spanish to English, from poetry to academic argumentation, and from art to science. It proposes a necessary method for de-colonial liberation, which reveals the transformative power of art in search of “an ecology of the soul, the resplendence of our connectivity to each other and the cosmos.”
Camila Marambio asks: So, the question is how can we revert this process of appropriation and corruption of indigenous knowledge so that the renewed interest be a liberating force and not another form of masquerade colonization?
Cecilia Vicuña answers: We are the corrupted code, we have embodied it, and we reproduce it unwillingly. How else to understand our indifference to self-destructiveness? Only through “decolonizing ourselves,” seeing our own trampas, pitfalls, can we begin to approach a true change.

The true performance is that of our species on Earth: the way we cause suffering to others, the way we warm the atmosphere or cause other species to disappear.
When we began this book-conversation in 2015, we shared a practice of the transformative power of performance, or pre-formance, dreaming of ways to extend it. Today, the #MeToo movement, #BlackLivesMatter, the feminist rallies around the world on #March 8 - 2019 and other mobilizations for refugees and ecological justice have changed the meaning of past and future performance, unleashing the potential of a quantum change in collective consciousness.
May this rising energy be empowered, and may our words serve IT.
Camila Marambio is the founder, director and curator of the nomadic research program Ensayos. Since 2011, Ensayos brings together artists, scientists, lawyers, indigenous elders and others to exercise collective emergent forms of bio-cultural ethics at the world's end.
Cecilia Vicuña (born 1948 in Santiago de Chile, lives and works in Chile and New York) is a poet, artist, filmmaker and activist. Her work addresses pressing concerns of the modern world, including ecological destruction, human rights, and cultural homogenization. Born and raised in Santiago de Chile, she has been in exile since the early 1970s, after the military coup against elected president Salvador Allende. Vicuña began creating “precarious works” and quipus in the mid 1960s in Chile, as a way of “hearing an ancient silence waiting to be heard.” Her multi-dimensional works begin as a poem, an image that morphs into a film, a song, a sculpture, or a collective performance. These ephemeral, site-specific installations in nature, streets, and museums combine ritual and assemblage. She calls this impermanent, participatory work “lo precario” (the precarious): transformative acts that bridge the gap between art and life, the ancestral and the avant-garde. Her paintings of early 1970s de-colonized the art of the conquerors and the “saints” inherited from the Catholic Church, to create irreverent images of the heroes of the revolution. A partial list of museums that have exhibited her work include: The Museu de Arte Moderna do Rio de Janeiro, Brazil; The Museo Nacional de Bellas Artes de Santiago; The Institute of Contemporary Arts (ICA) London; Art in General in NYC; The Whitechapel Art Gallery in London; The Berkeley Art Museum; The Whitney Museum of American Art; and MoMA, The Museum of Modern Art in New York.
Vicuña has published twenty-two art and poetry books, including Kuntur Ko (Tornsound, 2015), Spit Temple: The Selected Performances of Cecilia Vicuña (Ugly Duckling Presse, 2012), Instan (Kelsey Street Press, 2001) and Cloud Net (Art in General, 2000). Her Selected Poems is forthcoming from Kelsey Street Press in 2017. In 2009, she co-edited The Oxford Book of Latin American Poetry: 500 years of Latin American Poetry. She edited ÜL: Four Mapuche Poets in 1997. She was appointed the Messenger Lecturer 2015 at Cornell University, an honor bestowed on authors who contribute to the “evolution of civilization for the special purpose of raising the moral standard of our political, business, and social life.”
Cecilia Vicuña is the recipient of the Golden Lion for Lifetime Achievement of the 59th International Art Exhibition of La Biennale di Venezia.
order wishlist
published in June 2019
English edition
11,4 x 17,8 cm (softcover)
168 pages (b/w ill.)
12.00 €
ISBN : 978-0-9978744-3-3
EAN : 9780997874433
in stock
press releases
Critique d'art, Valentin Gleyze