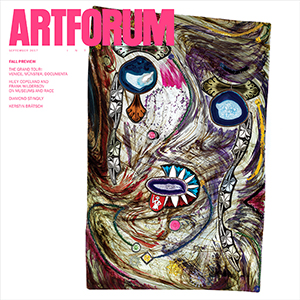 order
In their September 2017 issue Artforum look ahead at 40 exhibitions worldwide, Huey Copeland and Frank Wilkerson on museums, monuments, and race, reviews on the 57th Venice Biennale, Documenta 14, and Skulptur Projekte Münster, Amy Taubin on Top of the Lake: China Girl, and more.
This month in Artforum:

“What do you do with a group of people against whom the whole world is at war? Mainstream institutions of representation, no matter how liberal, aren't willing to wallow in this contradiction.” —Frank Wilderson

“Maria Eichhorn's work engages us not only in a continuing reflection on the histories of the victims of German Nazi persecution, but on the actual motivations for fascism's renewed resources and motivations in the present.”
—Benjamin H. D. Buchloh

“This is the Documenta I always wanted: difficult, demanding, experimental, and unafraid to take risks.”
—Nuit Banai

“Gone are the days when art was free to be reckless, unfriendly, antisocial, aloof, aggressive, critical, intellectual, overblown—in a word, interesting.”
—Diedrich Diederichsen

“Brätsch's contemporary rituals allow one to get closer to a world of unreality and chance, beauty and conviviality.”
—Daniela Stöppel

Historical Projections: Erika Balsom on the art of Rosa Barba:

“Barba's films ask what will be kept and what will be lost as the catastrophe of modernity pushes ever onward.”
—Erika Balsom

Openings: Johanna Fateman on Diamond Stingily:
“Stingily leaves much unsaid, and the breathing room around her understated sculptures, made from beauty supplies or hardware, draws out their symbolic and melancholic power.”
—Johanna Fateman